CLAUSEN TO START DESPITE INJURIES, SCABIES

Share All sharing options for: CLAUSEN TO START DESPITE INJURIES, SCABIES

According to the Tennessean, Casey Rick (uh, or one of them, dammit) Clausen will make the start against the University of Georgia tomorrow despite numerous ailments including two broken fingers on his non-throwing hand, a bruised shoulder, and a "sore" Achilles tendon that had Clausen in a walking boot this week.

An anonymous source reports that Clausen's injuries are larger in scope than the team is letting on, and that Clausen will be playing with a plethora of ailments on Saturday. An excerpted list follows: 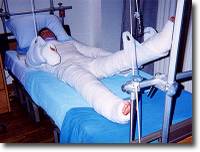 Clausen's looking A-OK for Saturday's start, despite an attack of the gout.