Share All sharing options for: I PREDICT A RIOT! I PRE-DICT A RI-OT!

Josh Crockett of Fanblogs--who comes clean and owns up to being a massive Virginia Tech fan--says going to Morgantown isn't even worth the trip anymore thanks to the violent Mountaineers fans and their version of Appalachian hospitality.

As someone who's been spit on--twice!--in Knoxville, had part of a seat from Sanford Stadium thrown at our head (explains some of our posts), and been shot at at a high school football game in Murfreesboro, TN, you need to put on your Hokie-high heels and go watch the game. What kind of world is it where a few burning couches and loogies tossed your way prevents you from going to cheer for your team? The World Cup features teams whose nations have actually killed each others' citizenry in recent history, and even they show up. (Albeit with heavier security than you might get at an Internazionale game, for example. )

It's a cheap slap to paint all West Virginia fans as couch-burning rednecks, too, as many of the comments beneath the post echo. Some of them, we know for a fact, are degreed, intelligent, hard-working couch burners, and are probably purchasing lighter fluid and scouting the Goodwills and Salvation Army stores of Morgantown for suitable apholstered tinder at this moment. Should the Mountaineers pull the upset, we hope for nothing less than orderly chaos and carefully placed Broyhill bonfires across Morgantown.

All of it--the screaming rednecks, the couch burnination, the insults and yes, spitting--adds up to far less than the unequivocal heavyweight champeen of hardass sports environments: a soccer riot in Afghanistan at a match between Afghanis and Green Berets. A night game in Morgantown is patty-cake with velvet slippers on in comparison. 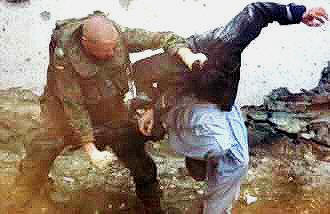