Share All sharing options for: IT'S TIME TO GET FLAPJACK NUTS AS WE PUT OUT OUR WEEK 3 BLOGPOLL BALLOT

We are now getting a body of work to judge these teams on--and not just hype--so it is slowly coming into focus. There are still some teams out there who have yet to face a real test so we expect next week's ballot could look alot different than this... but then again, isn't that the point? The AP is too caught up in inertia. Once a team is high, the slide is slow even when it is apparent that they suck (yes Oklahoma, we're looking at you) and the converse is true too (unless you're Notre Dame). Well, we aren't bound by those constraints so we intend to continue to call it like we see it... even if it means we go flap jack nuts every now and then and forget to add Florida to the poll. Without further ado, on to the rankings. 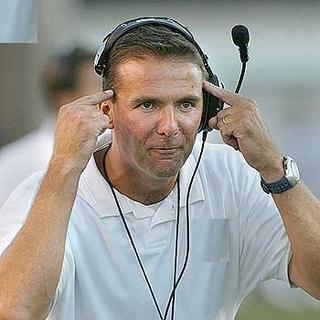 Urban Meyer reminding EDSBS to concentrate this time before doing the first draft of the blog poll ballot.

1. USC. There hasn't yet been a team that looks complete enough to challenge the Trojans (who admittedly are still coasting on reputation as beating Hawaii isn't saying much). They look to get fat on the Hogs this week. Heck, if Vandy can beat them, you'd have to think USC can hang 70 on them.

Orson: Beware the Houston Nutt factor! This was our bunker-dwelling wingnut upset pick of the year pre-season in the Blogpoll. Just reminding everyone of that should that actually happen this weekend, along with a rain of frogs, the sun turning blood red, and Ki Toy Johnson giving me a footrub in a bikini while we watch football this weekend. But, yeah, uncontested number number one. (sigh) Again.

2. Texas. Going to the horseshoe and winning a close one when your coach is Mack Brown says a lot about this talented squad. For the time being, they are number 2 but they won't have to lose to lose this position in our poll.

O: Mack Brown wins a big game. 2 and 3 here are interchangeable for the moment, but Tech loses some position for playing Duke. Not their fault, it's just the way our Jim Crameresque "Mad Money" system works. Buy the Longhorns baby! Mooo!

3. Virginia Tech. They looked awesome on defense... but it was against Duke. Vick is showing some signs of getting better too. Definitely a national title contender, but the ACC is so brutal this year that it will take a lot of Jenkins' good luck not to be upset or to be injured.

O: Jenkins is working some nice mojo with Mexico the Younger's passing, which is further along than his brother's was at this point. Or maybe now, actually, judging from what we saw in the Philly game Monday night.

4. LSU: Les Miles did not impress so much as their overall talent did. They easily could have lost that game, but with all the adversity and the fact that it became an unplanned road game, pulling out that victory says a lot about these guys. They'll have a chance to really earn this spot going forward as they play Florida, Auburn and Tennessee.

O: Hrrnngh...little shaky on this one. But give it to them for this week, if only because they pulled out a miracle game against a damn good opponent.

Here's where it gets really tough this week as few teams have looked like top 10 teams yet... but we need to fill the slots.

5. Florida: Their defense has been dominating against lesser-caliber schools thus far (but Wyoming looked pretty good in week 2). They are getting a better feel for the offense and although they haven't felt dominating, the numbers have been impressive. We'll know much more about this squad (and the Vols) after this weekend.

O: Methinks too high here, but we're perpetually suspicious of your homer streak, Stranko. The rushing game still give me the vapors (where's my laudanum?) and the special teams seem to the unit most resistant to the de-Zookification of the team, giving up some stupid-ass turnovers and flubs in both games.

6. Notre Dame. A little too high, but a win over Michigan puts them about right here for this week. A scary game coming up with Michigan State should worry them.

O: Good call on the Mich. State thing. Something HP is actually right about here: MSU throw up monsoons of points, which makes them muy peligroso for Notre Dame this weekend.

7. Georgia. They made a huge leap last week but should have lost to the Gamecocks. They didn't, so given what happened to many of the other top teams, we can't punish them too badly for it.

O: Hey, a win's a win. Don't be too hard on them, much as we're inclined to be. Defense is continued 24/7 nastiness. Shockley's dual threat still had an effect on the defense, which will help carry them through rough games like this one.

8. Tennessee. Ainge will not start so they moved up in the poll despite being idle.

9. Ohio State. They lost a game they were close to winning against the #2 team in the nation. Thanks to a collapse by a variety of other teams in weeks 1 and 2, that makes them 9 in our poll.

O: Little high for a team with no qb and a dribble-piss offense. We'd bump 'em out of the top ten and move Tech or Clemson up.

10. Georgia Tech. It wasn't pretty but they are 2-0 with a win over an Auburn team which looked pretty good this week. We still don't trust Chan Gailey.

O: Neither do we. With UConn coming up, though, they're going nowhere for two weeks in the polls.

11. Boston College. Two solid weeks of no-nonesense victories they should have had. Now on to Seminoles.

O: HUGE week for them facing FSU at home. Herbstreit and Corso come to Chestnut Hill. Make pretty, Eagles fans, and feed Corso some of the lobsters you catch next to the sewage treatment plant outflow for us, okay? We hear they're big as dogs.

12. Louisville. The past week has made me forget that they almost lost to Kentucky. Plus, with their schedule, they should continue to climb the charts.

O: They're top ten material. Go ahead and reserve the slots.

13. Clemson. Very close to being 0-2 but they are 2-0. Maybe they'll follow Ohio State's blueprint for a national championship run from a few years ago.

O: A little low for a good team--we just like the fact that Rod Spence has Whitehurst completing scads of short passes and is pounding the ball with consistency. The defense is gelling too, which we have to mention as charter member of the Vic Koenning fan club.

14. Michigan. If they don't learn from the Notre Dame loss, they could be in for a long season.

O: And the Michigan blog community could walk away with Jim Hermann's head before it's all over.

15. Cal. Rebounded nicely from the loss of their starting quarterback.

16. Arizona State: Looked good in defeat against a good team. 1-1 but with hope to have a good year.

O: If they beat USC and Sam Keller throws up those types of numbers weekly, do we have a Dark Horse Heisman candidate here? He's certainly got the name for it.

18. Purdue: Didn't show much yet but has a nice schedule... although that Notre Dame game is looking tougher now.

O: Both teams have done the premature ejaculation move in the past few seasons: early winning streak, late collapse. One of them will likely blow their load early again.

19. Florida State. A close game in the 3rd period against the Citadel. WTF?

20. Miami. They still can't believe they lost to FSU.

O: And they're moving somewhere in our poll next week, since they play Clemson, which will either move them up with a win or entirely out of the top 25 with a loss.

21. Oregon. Their offense is showing some nice potential.

O: If they beat USC, they're going to take the biggest leap any team takes in the polls all year.

O: And won't for another two and a half weeks. An inconceivably weak schedule.

24. Iowa State. They crack into the top 25 with a win over rival Iowa... but they've gotten off to too many hot starts only to fizzle for us to jump them too much too fast.

O: Good call. A cocktease of a team.

25. Iowa. Hanging on by a thread after being soundly thumped by Iowa State... but with Ferentz as their coach, we can't imagine they'll stay down.

Finally, as a part of our required disclaimer, a listing of the games we watched: