PETA has come out and asked South Carolina to change their name, since cockfighting is a brutal, bloody sport that doesn't exactly benefit the animals involved. (But have they thought about what the roosters would be doing out in the street if they didn't have fighting?)

Being the idiot that we are, we went all the way to Laos to watch our first cockfight when we could have gone a few hundred miles east to South Carolina, our own little neighboring slice of the developing world. It looked like a pretty bad affair for all concerned, though it probably looked worse than it was by certain things that are very cheap in Vang Vien. (Beer Lao was like a buck fifty for a gallon or so of low-grade, cold brew. And marijuana may have been involved, too. Or both. We have a hard time remembering.) All we remember was blood, feathers, and shirtless brown men screaming like banshees while tossing around oddly colored money excitedly. And that sentence will likely be our epitaph. 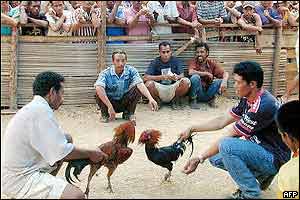 We're the guy in plaid along the fence. And no, we weren't close to sober.

But as someone who polishes off more chicken than some large Chinese cities, we can't feel anything close to sympathy here. We know very little about PETA with the exception of all of those hot naked women they get to prance around naked at fur shows. However, if they're against cocks, we've got a problem with them, since like most men we're pretty happy with ours.
(Admittedly, some sites are bigger fans of cocks than others.)

In response, we kill two birds with one stone by declaring our support for South Carolina and by posting a picture of a man who knew a thing or two about taking cocks seriously.

Johnny Wadd: surely PETA wouldn't have a problem with him?Or his 'stache?