Choice questions from BGS, who deserve thanks for hosting this round.

1. Who are your rivals? Traditionally Georgia's the big game on the schedule, but there's no real animus there for us. They've got a cute dog, they haven't consistently whooped up on us for a decade, and their fans, despite throwing a bolt at our head once, have never really made my gorge rise the way certain others do. (They've got attractive women in plaid skirts who greet even the lowly band when you come as a visitor to the school--probably has something to do with it.) Plus we like Richt, despite his pedigree and Bowdenesque disciplinary policies.

Florida State is a cardiac serious one, and probably the consensus pick for the Gator fan's Moriarty/Voldemort/Lundberg of choice. They make it worse by beating us most of the time and patting players on the head while they steal the colostomy bags off senior citizens. (We've always wondered what Randy Moss really did to get kicked out there; sure, it was weed. We bet he shot a hapless fratboy in the face in broad daylight for scuffing his kicks and yelled "Riverside, motherfucker!" after he did it.) We just puked typing that, so that must be close. 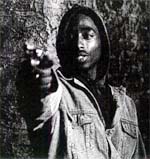 FSU has a habit of "Riverside, motherfucker"-ing the Gators.

The rivalry for us that rankles most personally is the Tennessee game. We'd normally like fans that pee in the street, spit on the opposition as they enter the stadium, and fill up the jails for five counties around when they come to town. (In Europe, they call them "English".) But their rank, whiskey-soaked bitterness, horrid orange, delusional call-in shows, and "Rocky Top" all combine to add a nasty personal edge to the drudgery of playing them each year. As a fan, we're used to losing against FSU. Losing to CRDP and his flock ruins our whole fucking month. Personally, that's our pick.

2. Odds on the rivalry game? Call us mad, but we probably stand a very good chance of beating all three this year: UGA's allegedly vulnerable and FSU's got Jeff Bowden and his Tecmo Bowl playbook working for them. UT's the biggie, and we're with Checkerboard on the odds--even.

3. The rivalry we'd like to see? Florida/Harvard, if only for the joy of watching 900 SAT qualifiers from underprivileged backgrounds pound the living hell out of a group of fancy lads. We imagine it playing out like a teen drama--Harvard threatens to buy Ben Hill Griffin and demolish it to make a country club, the ragtag bunch of guys bet their family's homes as collateral, and they all fight a guy with fingerless gloves before demolishing the fancy lads with an array of highly cinematic trick plays. Oh, and they steal the Harvard guys' girlfriends, too, only to turn them into ecstasy-crazed ass-droppers before dumping them somewhere along Alligator Alley.

Billy Zabka would have to play the part of fingerless glove guy.

Also deserving mention would be a potential Tennessee/West Virginia matchup, if only because the host town afterward would look like Dawn of the Dead.

4. The best rivalry is Ohio State/Michigan. Cold, blustery drama underneath perpetually overcast skies. Bands. Huge land-grant uni crowds clad in diametrically opposed colors. Big, freaky plays watched with bated breath by fans whose whole year hinges on a single pass, fumble, or run. We're so excited typing this that we're chugging two bottles of Nyquil to kill the next week to close the gap between us and the season.

5. The best trophy is the Keg of Nails for Louisville/Kentucky. It just sounds hard. The worst trophy is the Seminole War Canoe for Miami/Florida. In lieu of the Canoe, we suggest the two schools play for the trophy of the Seminole War Casino, an establishment devoted to student gambling that will be run by the victor's school for 364 days following the game, with the victor also entitled to cheap junkets subsidized by the loser. Put the thing somewhere off the Florida Turnpike, put Miami back on the schedule, and let's get serious about this rivalry.