The Bemusement Park coins a new word for the sort of agony Steve Spurrier will likely encounter at SC this year as the wolves of the SEC East and the vultures of the NCAA feed off the stinking carcasses Lou Holtz left behind for him:

I don?t think the outcome of this game is much in doubt. I see visors flying through the air before halftime and, at the end, something operatic: Spurrierdammerung, if you will.

Ah, and the schadenfreude won't come fast and hard enough for the Cocks once Spurrier lays out a clunker or two, either from the media or from the cackles of rival message boards. The sanctions and ongoing investigations, though, may have quite the opposite effect on Carolina as a team on the field, however. In fact, South Carolina, already the wild card in the conference, just went from intriguing to "sewer-dwelling underworld mutant" frightening in terms of expectations for the season.

Flashback to Auburn, 1994. Jackshit to play for since Pat Dye leaves them in hock to the Rules and Violations committee. No bowls, no fun, no season in the sun--nada for goodies. A noticeably slimmer Terry Bowden takes a talented Auburn team to an undefeated season that year, basking in the glory of being the ultimate squad of haters: a team bent only on inflicting harm for harm's sake. (At this point we would launch into a misty, painfully nostalgic diatribe here about the pass from Patrick Nix floating into the arms of Frank Sanders in the far corner of the endzone with 1:42 on the clock in the 4th, but every time we do that a red mist clouds our vision and we wake three days later up naked and shivering in the county pen.) 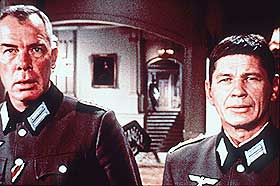 Spurrier's just the guy to pull off a suicide mission like SC.

Who better to pull off a similar suicide mission of a season than nose-picking, face-twitching Sideline Lucifer himself? With an ego-mad coach bent on winning again and a decent styrofoam cooler full of talent (we would say cupboard, but we are talking about SC here--it's a styrofoam cooler or nothing,) the Cocks already make treacherous pickings for the powers of the SEC East. Toss in a season or two hobbled by sanctions and a lack of any positive incentive whatsoever, and you've turned a renegade program into an outcast renegade program.
Spurrier could play the Lee Marvin role in this Dirty Dozen remake quite nicely, we think.