HP, in his latest bit of fiskitude, types this:

Look, we love ya Orson and no hard feelings. Keep up the good work at your site. But, dammit, be BOLD!

He's right, you know. We founded EDSBS.com in order to exhibit our cowardices as a fan to the rest of the world, which is why we're constantly doing things like beating up old ladies for their change, divorcing our wives via text message, and letting guys throw their beers in our faces at the Star Bar. In fact, we just sent off for Charles Atlas' Guide to Manly Strength Through Push-ups after Phil Fulmer kicked sand in our face at Panama City Beach last week. We'll have pics of us stealing candy from babies up later this week once we switch to our new WordPad format. Fulmer just wouldn't leave us alone. We wish we had a he-man body like his...

We'll continue to be cowards, too, by refusing to make sweeping generalizations about a season we haven't seen with the certainty of someone writing canonical law. (Hey, Catholic Packer Fan, that's pretty certain stuff, right? We'd ask a priest, but the last time we went into a church all we saw was blue flame, a lot of smoke, and a deep voice rumbling "Oh no he didn't!") We'll also keep doing other cowardly things, like assuming what we do is fun, sloppy, and totally amateur entertainment with a smidge of information tossed in for good measure. (We thought that one up when Sylvester Croom was giving us a purple nurple at SEC Media Days last year. We totally peed our pants! He laughed and kicked up in the knee after we said 'uncle.') 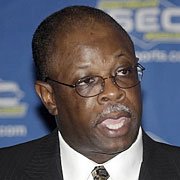 Croom: gave us a totally wicked purple nurple.
We'll also continue our yellow-bellied ways by assuming there's more than one way to skin the cat-not that we'd ever hurt a cat, since it would probably just scratch us to pieces!-and try to lay off the Grand Unified Theory of college football stories.
Oh, and don't forget all the cowardice we show with a relatively laid-back attitude, lack of clear-cut agenda, and willingness to compliment teams we admittedly don't like while criticizing teams and coaches we love. Some people think if you're even-tempered, that means you're well-adjusted, but we know that on the internet, that means you're a total pussy. Which, by all means, we totally are. Please don't hit us for saying that.
We'll also be cowards by repeating our knock-kneed picks that USC won't repeat as national champs and that Adrian Peterson, a sophomore, will win the Heisman. And when we're totally wrong, we'll be chickenshit enough to admit it! God, we're total pussies now, aren't we?