UCLA: FOR WHOM THE BELL TOLLS.

Share All sharing options for: UCLA: FOR WHOM THE BELL TOLLS.

This LA Times article on Drew Olson's recovery reminded us that the UCLA Bruins were not only in the Pac-10, but in fact existed at all. In the town they claim in name, the Bruins are overshadowed by the flashy USC Trojans, who not only are riding a two-year wave as national champions but also take delight in trouncing them in recruiting and in the regular season matchups, going 5-0 over the past five years. (Yes, last year was close, but a win is a win. Take your solace elsewhere in your dreamworld, Bruins fans. There's always softball.) 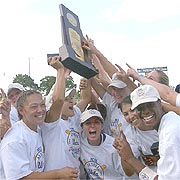 Bruins fans take it where they can get it.

We know one lucky soul who remembers UCLA at all times, though: Mack Brown.(Click here for a magnificently captioned photo of the current Texas coach.) Brown owes his break into The Big Job at Texas to UCLA and the results of the biggest regular season blowout between two major college football powers in memory: the 66-3 annihilation of Texas by UCLA in Darrell Royal stadium. The Longhorns turned the ball over...(sound of throat clearing)...eight times in the course of making Cade McNown look like the next coming of Football Jesus. We remember watching the game-Mackovic on the sidelines had the ashen look of a stroke victim. We want to type something funny here, but we just can't; Mackovic looked like the guy in Indiana Jones and the Last Crusade who drinks from the wrong Holy Grail and ages a thousand years in an instant. Watching Cade McNown float the ball downfield at will, we could almost hear the voice: "He chose...poorly."

John Mackovic, don't say he didn't warn you.
Really, check your hard drives: has there ever been a bigger regular season loss involving a major program? UCLA destroyed that team for the season, less than a year after the Longhorns, with both Ricky Williams and Priest Holmes in the backfield, stunned a classic 'roid rage Nebraska team of maulers in the Big 12 championship game, 37-27. Mackovic went from genius to statue in thirty minutes, and the boosters at Texas literally had no choice: Mackovic was D.O.A in Austin. If he were Japanese, Mackovic would have disembowled himself on the sideline midway through the third quarter. This might have been preferred by Texas fans, who watched the team spiral into the ground with a 4-7 season further marred by losses to Texas Tech, the hated Aggies, and-gasp!-Baylor. Enter Mack Brown, who sweeps away the ashes of the Mackovic era and turns Texas into a legitimate national power, much to the surprise of those who think Mack Brown's idea of an intellectual challenge are the puzzles in Highlights magazines.
UCLA's Max Q game-the NASA term for optimal system performance-also marked a turning point for UCLA as a program. Though they ransacked the Pac-10 for another 10-2 year following the Great Cow Massacre of 1997, the rebuilding following Cade McNown and DeShaun Foster never materialized. The Bruins wandered through a muddle of mediocre seasons until Bob Toledo used whatever credit he'd accumulated in two successful years watching a reborn USC begin their march to dominance across town. Toledo was fired in 2002, a result not only of his own program's decline, but its eclipse by a rival program.

Proof that all things which go up, must come down.
Point being? Glory, shame, disaster, dominance...all ephemeral things in this great game, especially in a college football environment marked by ramped-up competition in every facet of the game. Urban Meyer sends recruits nine text messages a day. Jeff Tedford's got his staff sleeping in their offices. Playbooks have swollen to the size of Torahs. The rule now is flux: adapt or die, and do it in three years or less. Coming up with our own preseason top 25 has brought home how ludicrous the "art" of predicting the season really is, since half of last year's geniuses on the board will have their asses in the fire at season's end, and a few of the idiots will savor their own reformations following winning seasons.

In this ruthless, Darwinian landscape, old-school drudges like Phil Fulmer and Mack Brown can almost seem comforting. Note: we said almost. Should the upcoming season swallow one of them whole, we can't say we'd be sad, surprised or shocked. Just ask John Mackovic or Bob Toledo: the moment the slip begins can happen anytime to anyone, and when it does, the trip down can be very, very quick.