Welcome to Chapter Three of our ongoing study of the art and science of college rah-rahdom also known as Pepidemiology. Chapter Three will focus on an oft-overlooked but integral part of college pep: the costumed mascot.

ASU's Sparky: Devil worship never looked so funny.
Note must be made here about the term "costumed mascot." The mascot, the living, breathing symbol of a team, can sometimes be a living, breathing member of the species, as in the cases of Bevo the Longhorn, Ralphie the Buffalo, or Uga the Bulldog at UGA. We're splitting mascots in two categories for a good reason: costumed mascots and animal mascots have distinctly different skill sets. Ralphie can stampede, the War Eagle can fly around Auburn, and Smokey the Hound Dog at Tennessee can bite people on the sidelines with impunity. We remain certain that this is not the case with costumed human mascots, though Tree at Stanford may indeed be capable of the biting part, for all we know. Thus the division into two categories in our taxonomy. (This is science, people.)
The costumed mascot takes on one of three forms:

1. The Animal. This is usually an anthropomorphic representation of the team's animal mascot, outfitted with a team-appropriate uniform or traditional clothing. Examples include Alabama's Big Al, Aubie the Tiger, Cocky the Cock from South Carolina, the Oregon Duck, Sebastian the Ibis from Miami, Zippy the Kangaroo from Akron, and Oski the Bear from Cal-Berkeley. Resembling Disney characters in their body suits and identity-swallowing headpieces, animal mascots make kids coo with joy, goof on the sidelines for the network cameras, and sometimes pass out from heat stroke in warmer climes to the general bemusement of the drunken fans watching above, unaware that the hapless and undoubtedly short college student inside has just exceeded maximum sustainable body temperature.
The most literal representation of the Animal-type mascot is Georgia Tech's Buzz, who comes complete with squishy insectoid body, bugged-out compound eyes, antennae, and wings. Now that we've typed that, we're thinking of what a tribute it is to the suit's designers that they made such a bastard of a creature so downright endearing in person. Maybe it's the black Chucks that do it

Buzz: pumping the Chuck Taylors like it's 1984.
2.The Humanoid/esque The second category of costumed mascots, itself coming in two types. The first is the non-body-suit-wearing human mascot, who wears the outfit of the team's mascot and perhaps tops it with a hat, walking stick, cane, sword, or other accoutrement. Notre Dame's feisty Leprechaun, WVU's Mountaineer, the Tennessee Volunteer, the USC Trojan, and Chief Osceola of FSU all fit into this category.

Difficulties of the NBSWHM include finding a willing blithering idiot volunteer who is an approximate fit looks-wise to perform the role at games, pep rallies, and university rubber chicken dinners and fundraisers. These wretched, damned souls volunteers then spend most of the game leading cheers, doing flips, or in Osceola's case, violating county fire codes by throwing flaming spears into the ground. The epitome of the Humanoid mascot in Pepidemiology terms is WVU Mountaineer, for reasons to be explained later in the chapter.

The Leprechaun. Occupational hazards include: not getting any for four years straight.
The Humanoidesque is the second type, clad in a body suit and oversized headpiece designed to resemble the icon from which the team's name is derived. Examples include the Virginia Cavalier, Wake Forest's Demon Deacon, the Nebraska Cornhusker, and Pistol Pete from Oklahoma State. Humanoidesque mascots spend most of their games waving their hands frantically, pumping their fists, and scaring the living bejeezus out of small children around the stadium with their maniacal grins, huge plastic teeth, bizarre outfits, and sinister, fixed glares. Like animal mascots, are susceptible to quiet death by heat stroke and blindside assault from angry fans.

The Demon Deacon: haunting the nightmares of children for decades.
3. The Enigmas Colloquially known as the "OMIGOD WHAT THE FUCK IS THAT! BRAIN IT WITH A SHOVEL BEFORE IT BREEDS" category, this type of mascot is the catchall emcompassing those types of mascots defying easy classification or description. Sometimes they're representations of mythic creatures, like Arizona State's Sparky or Duke's Blue Devil. Others are literal representations of teams' names, like Brutus the Buckeye or the Syracuse Orange. A few teams detach from reality altogether and go the Dada route, the best example being Western Kentucky's legendary Big Red. (ESPN commercials had something to do with his notoriety, though he's not the only one who got nice pub from ESPN: the Orange makes a nice appearance here getting his ass kicked by Charley Steiner. 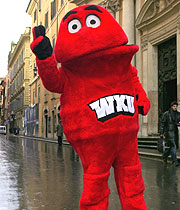 Big Red, making people giggle from Lexington to Venice.
Mascots of this variety, while engaging in many of the same rah-rah activities most other mascots do, often inspire one of two reactions form fans: laughter or horror. The premiere example of the non-representative mascot, in both appearance and behavior, would be Stanford's Tree, famous for getting in real fistfights with Cal's Oski and threatening to kick the ass of the Washington Huskies' mascot if he even gets close to Tree.

Tree and Oski throwing down.
(Possibly true story: the selection process for becoming Tree is an arcane, subjective, and totally unscientific process one alum let this contributor in on in drunken discussion in the mid-90s. Open auditions with no requirements or directions are announced. Applicants are free to do whatever they like to convince the judges they would make an ideal Tree. One applicant doused their own feet in lighter fluid, set his shoes ablaze, and hopped in place as two naked women danced in circles around him screaming "We love you, Tree!" We have no recollection if he got the job or not, as we passed out shortly after the conversation, Nintendo 64 controller in hand.)
Conclusion: Case Study. So what can a costumed mascot acheive in a college game? At their best, they can channel the spirit of the assembled crowd into a single, ridiculously costumed avatar to behold, worship, fear, or if you're in the visitor's section, toss a beverage at. A superb case study in just how iconic a single, costumed individual can be to a college football program is the West Virginia Mountaineer.
The Mountaineer could have looked like something out of a Disney Davy Crockett movie, but WVU kept it real when they came up with the outfit and the casting. First, the Mountaineer has to be big-as in big enough to play for the team, or at least look that way from the stands. Burly is the word, here, complete with a full beard. He wears a buckskin suit and a raccoon cap, sure, but no Hollywood looking chamois or faux fur will do; the Mountaineer wears dark, unevenly colored, and oily cloth that looks like the tanned hide of an undetermined bit of roadkill, and the hat looks as if it will crawl bleeding off his head at any moment. The piece-de-resistance comes with the addition of a musket he totes around (note: not a rifle, but an antediluvian musket that fires with powder) and the frequent absence of shoes in warmer games.
The Mountaineer, more than any other mascot we know, represents the ideal role of accurately projecting the collective image of the fanbase onto a single palette. The Mountaineer doesn't do anything fancy. He doesn't flip, or lead namby-pamby cheers, or dance little jigs. He screams like a banshee and brandishes a firearm for the better part of four quarters, basking in the whiskey-infused roar of the Morgantown crowd and screaming back at them like a redneck Incredible Hulk. When the Mountaineers score, he fires his rifle in the air, and West Virginia fans go insane. The best tribute we can give the Mountaineer is this: he's our odds-on favorite in our own dream version of "Mascot Death Match," with or without the musket.