Dennis Dodd continues his three-part series on the intricacies of scheduling with a piece on road openers. A couple of notes:

-Heismanpundit, take note: your belief that SEC schools rarely wander far from the roost is...well, totally validated in the piece. Only two SEC schools will open on the road to open the season: Ole Miss and Vandy, not exactly the cream of the crop. By comparison, USC will open at Hawaii, Va. Tech will open up at NC State in a rematch of Tech's only conference loss last year, and Texas A&M goes into Death Valley in the second part of a home and home series with Clemson. Hell, even stodgy Georgia Tech is taking a trip to Auburn to get its whooping out of the way. Looks like you're right for another year. 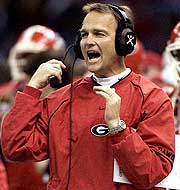 Not fond of travel, and not alone in his conference.

-Dodd gives his "No Shame" award to Texas Tech, who lines up a row of non-conference patsies unparalleled in their mediocrity: Florida International, Sam Houston State and Indiana State. FIU, who's just barely a 1A team, just got a little weaker when they were hit with three years' probation for conducting improper offseason workouts. On the upside, we might just get to see the record for greatest loss ever broken in one of the three games, eclipsing poor Cumberland College's 222-0 loss to Georgia Tech in 1916.
(Note: Georgia Tech did not throw the ball once. Rushing totals for Tech: 978 yards. First downs: none, since they never needed more than four downs to score. Check out more bellyaching over Cumberland and the other worst teams ever: here, for the writers' choices, and here, for the readers'.)