THE BIG TEN, WHERE THE ONE-EYED MAN IS KING

Share All sharing options for: THE BIG TEN, WHERE THE ONE-EYED MAN IS KING

Why hide your regional biases? We here at EDSBS.com live in the Sun Belt, where the education is crappy, the traffic and smog are smothering, but the weather is near-tropical most of the year. We run for the fireplace when the temp dips below fifty and wear suits with a neat crease in ninety degree weather. When we think about spending more than a few days in a row in a place like, say, Madison, Wisconsin, we start to consider Schopenhauer's arguments about the nobility of suicide seriously. (Hey, it's cold as hell in Germany. Of course you're going to be a pessimist.)

Another punishing November in the southern U.S.A.
That said, we seriously fucking respect the Big Ten, and not for trivial reasons like a plethora of brilliant uniforms, or the legions of chunky (but mysteriously sexy) farmgirls in the stands.

The Big Ten is perhaps the conference most devoted to the idea of pure competition, and by that we mean the dogfight mentality where each week teams take turns trying to rip the other team's eyeballs out. In the SEC and Big 12, a loss can still get you to the championship team, provided someone else kneecaps the team that beat you along the way. In the Pac-10, everyone just waits for USC to get their automatic bowl bid, except for Cal, the only team out there that seems to want to play sixty minutes with the Trojans. The ACC is still too much of a muddle, and the Big East...well, they're thinking about roundball by September 1st.

In the Big Ten, though, a loss is just a start, since somewhere along the way, you will lose, and lose hard. Daniel Patrick Moynihan once said that the key to being Irish was knowing in the end that life would break your heart. Well, every Big Ten fan is an honorary Irishman, since hard losses are part of the deal. Why? Because more than any other conference, the Big Ten is about brutal, cold parity.

Last season shows why. Minnesota, everyone's favorite losing dark horse bet three years running? They get stunned by-gasp!-Indiana on October 30th. Michigan looks like a world beater until they get beat by-double gasp!-their struggling mortal rival, Ohio State, in late November. Ohio State never really gets off the ground (and we mean that literally, since their offense came up with nothing in the air), but salvaged their season by ruining Michigan's. Iowa looks great until dying 44-7 at Arizona State and losing at Ann Arbor in a slugfest. Purdue's Heisman baby, Kyle Orton, implodes after a 5-0 start and is benched during a horrid 0-4 stretch in the middle of their schedule. And Wisconsin proves the biggest tease of all, going undefeated-even beating the Buckeyes and winning a tough game with Purdue-until losing to middling Michigan State and then dropping one to Iowa.

So is the Big Ten the conference of perpetually unfulfilled expectations? Maybe, if you don't consider what a bruiser conference it is to begin with: steeply tilted homefield advantages, nasty weather conditions after October, and big, mean, physical teams that lean on the run and throw jump balls off the play action to reeeaaalllly tall receivers. They don't schedule too much cake in the out-of-conference league, either: Notre Dame makes plenty of schedule appearances, as do several Pac-10 teams a year.

All this and no championship game to even out those losses a la the SEC and Big 12 make the Big Ten one big four-month-long-Kumite-style round- robin beatdown. We don't envy them: hell, even when you win over a rival, they don't give you a proper trophy. Instead, you get some useless item seemingly chosen at random from the gift shop at a Cracker Barrel: the Old Oaken Bucket, Paul Bunyan's axe, Ye Olde Brass Spittoon, the Little Brown Jug...they may mean a lot to you, but we just hyperventilate thinking about the bad "kuntry" decorating at our aunt's house when we were a kid.

Play sixty minutes, win the game, and win...this? WTF?
Which bring us to another thing that instills fear in us: Lloyd Carr.
Carr gives players some of the nastiest looks in college football. He looks like a landlocked Ahab most of the time, pacing and scowling and calling the same seven plays over and over again and daring defenses to try and stop them. The hip pick in the Big Ten is Iowa, but we're inclined to believe that Ferentz, intense and systematic as he is, will follow his usual pattern of racking up impressive numbers while losing one game he shouldn't annually. He'll be gone to the NFL soon enough. Carr, on the other hand, isn't going anywhere: like Phil Fulmer at Tennessee and Mack Brown at Texas, he knows his depth and is staying put 'till he gets kicked upstairs to Bo Schembechler's old office.

Carr never fails to put a good team on the field. His defenses are physical-if at times inconsistent-and his offenses are a work of simplified genius, alternating the pounding of a big back with boots to the tight end, halfback screens, and precision deep balls thrown off the play action. We love Steve Breaston in particular, who has not only flat-out deep speed but that lateral wiggle you need to shake defenders on short passes and reverses, which you will see a couple of times a game from them as long as he's starting.

Yes, most of the time we prefer to be contrarian. But who else are you going to pick in the Big Ten? We can't pick the Evil Sweater Vest, simply because we think he's as fake as knockoff Adidas and doesn't have enough offense to save Ohio State's terrifying defenses. Wisconsin always disappoints; ditto for Minnesota, a rare college dome team that plays just like pro teams do when they leave the friendly confines of the home turf-badly (2-4 last year...ugh...) Michigan State is freakily inconsistent, and if Purdue gets shut down in the air, they're done for the game. And Illinois and Indiana are reconstruction projects in the extreme. (Illini fans in particular are in for a hellacious season with Ron "Constant Improvement" Zook at the helm. Your next coach will reap the rewards, so just hold on to him long enough to stock the shelves with his aggressive recruiting. In the meantime, grit your teeth and think of England...) 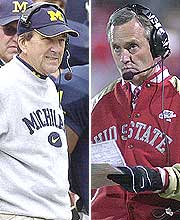 The Big Ten still comes down to Ahab vs. the Evil Sweater Vest
Michigan's the logical pick, but not without a loss, though, either to Ohio State in the annual "Mortal Pain Bowl" or at Iowa on October 22nd. And with that loss, they're likely out of the national championship picture if two teams in other major conferences go undefeated. This is an extremely likely scenario, given the results of the BCS the past few years. Which means two things for the Big Ten. First, a championship game is on the way, especially with the automatic bid to the Rose Bowl gone and other major conferences holding them at the end of the season. Second, the fact that the championship is on the way should delight Big Ten fans. It will allow for one more dynamite matchup before the dreary anticlimax of bowl season and simultaneously ensure that the parity and tight competition characteristic of the Big Ten won't punish a team nationally, but will reward it instead with another victory over a quality opponent.
In a schedule riddled with potential upsets, the dictum that rules the Big Ten should be "In the land of the blind, the one-eyed man is king." We just think that little conference king deserves a shot at the big crown at the end of the year.