A FOOTBALL PLAYOFF: HAN SOLO WOULD DO IT.

Share All sharing options for: A FOOTBALL PLAYOFF: HAN SOLO WOULD DO IT.

We know that you're very smart. How else would one get to the stage you're at in life without being really smart? You're the head of a nominally important organization that actually doesn't do much but pays its members very well. You don't have to do much actual work, and you apply your byzantine set of rules to situations with little to no oversight from external authority. All of this, and you get tickets to whatever sporting event you want all the time while insisting your business isn't actually a business.

In other words, you're living our dreams of duplicitous and riotous success as a Han Soloesque scoundrel, and sometimes, frankly, we're a little jealous.

One thing that we can't understand, as an aspiring scoundrel to a successful one, is why you haven't taken advantage of your position to do what the basketball people have done: triple your money and start a national playoff for football.

We're sitting here wondering how you could turn down the sheer numbers-the tv rights, the ad revenue, the ticket prices an integrated bowl system playoff could command-in deference to the shit-kickers inconvenienced by the diminished importance of the Humanitarian/Motor City/Sun Bonnet/Poulan Weed Eater Bowl. Look at the passion and the insanity of what a basketball tournament means; can you imagine what it would be for a really important thing like college football? It would be World Cup level intensity, minus the rioting and the nationalistic taunts.

And since it's been established that it's about the money, and not about the amateur purity of collegiate sports, don't feed us the line about the "tradition" of the bowl games. The Rose Bowl? Yes, there's some tradition there. The Music City Bowl? Two-thirds of the other games out there? No.

Watching Auburn/USC last year could have meant watching the game of the decade. Same for LSU/USC last year, or for Nebraska Michigan in 1997. We're not even including the possibilities raised by teams excluded from the big games from the countervailing obligations of conference bowl slots or mid-major conference status (See Utah last year, or USC two years ago for examples.)

We just think you're sacrificing the whole cow for the hooves by kowtowing to the bowlmeisters in their festive jackets every year and sticking with the BCS, a formula created to name a single national champion that has produced two split championships in the past three years. And that was after improvements were made!

So now I get to be riveted by teams I don't even care about, playing a sport I don't even particularly like, simply because of pure, cold competition deciding the outcome. For basketball to have a more exciting finish than the grand sport of the gridiron is a travesty. We know you're smart Myles. Just show us what a proper scoundrel you are and make this caper happen, okay? 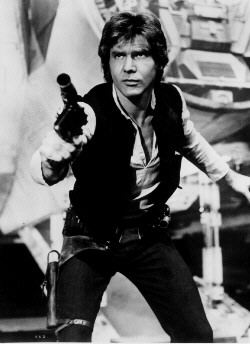 Han Solo would institute a playoff system. Trust us.