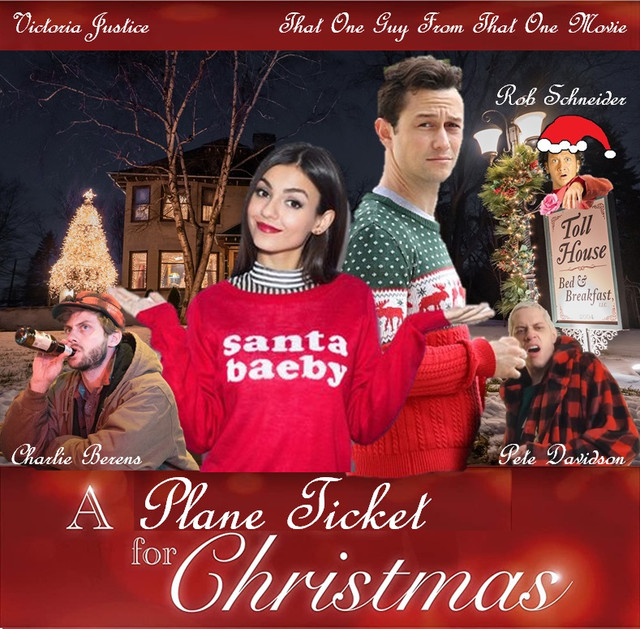 ACT I, SCENE I: The Introduction

That One Guy From That One Movie stars as Brayden Connor, a tech journalist who’s down on his luck after the collapse of FTX.

He’s trying to get back to his 3500 sq. ft. studio apartment in LA for the holidays, but all the tickets are sold out, and there’s a bomb cyclone threatening in Chicago.

Meanwhile, Kate Delacruz (played by Victoria Justice) is having a Big Old Fight with her fiancé in New York about him not wanting to come with her to Ellay to visit her Well-Meaning But Somewhat Oppressive Family for the holidays, and his ticket is non-refundable!

In a fit of pique, Kate throws her jerk fiancé’s ticket on the ground and storms off to wait.

An old man who looks suspiciously like Santa Claus (played by Rob Schneider for some reason) has been watching both Brayden and Kate, and goes and picks up the ticket. He sees that it is to LA, and goes and hands it to Brayden, with a wise quip about the key to Christmas magic and how what really matters is getting on board - which is juuuust different enough from The Polar Express to avoid a lawsuit.

Brayden sees that the ticket is to what he thinks is an aisle seat with space for his bag and shuffles through security and over to the gate.

There’s a whole set piece bit in the lounge where Brayden and Kate come close, but never quite actually, bump into each other.

Upon boarding, Brayden finds his seat occupied by a large and expensive briefcase. We come to find out that Kate is an investment banker for a large New York firm and was planning to get some Very Important Business done on the flight now that Jerky McJerkface is no longer coming. An argument ensues, culminating with Brayden whipping out his plane ticket; when an indignant Kate asks him where he got it, Brayden simply says, "Santa Claus." Kate gives her briefcase to a well-timed flight attendant to check as luggage below, and both sit down in a huff.

The flight takes off, and Brayden/Kate make minimal chit-chat. Brayden is very tall, so naturally shifts around uncomfortably, which disturbs Kate’s attempts to sleep. As the chit-chat turns more argumentative, the captain comes on to inform everyone that the bomb cyclone has arrived and is too large and powerful to avoid. Therefore the flight is being diverted to…Manitowoc, Wisconsin.

Brayden and Kate know that they’re going to be Stuck In Wisconsin over the holidays.

Brayden pays for a cab ride for both of them to the nearest hotel since They Don’t Have Ride-Sharing Apps In Wisconsin And The Cabs Only Take Cash.

The hotel is family-run, with Charlie Berens (of course) playing the Fun-Loving But Down On His Luck Midwestern Dad Hotel Owner who has some hilarious repartee with the Dumbfounded Coastal Protagonists.

We then cut to the two unloading their things in side-by-side rooms before adjourning to the lounge where Kate is hoping to Get Important Investment Banking Work Done on the "kaynda spaatty Whyee-Fhyee." Brayden comes to find out that Kate is a Brilliant Quant for a Major European Bank With Degrees From MIT, LSE, Harvard, and Stanford. Her fiancé is a Cryptobro who’s heavily into NFTs. Kate learns that Brayden was a promising pianist and cellist Like Her Now-Deceased Father before he was forced to take up the "lucrative" career of Tech Journalism to pay the bills. (A concert grand and family heirloom cello are conspicuously present in the hotel’s lounge.)

Brayden and Kate eventually get around to Life-Changing Revelations about each other’s families, lives, and careers. There is a montage of shopping in the small town downtown, ice skating, and snowball fighting - all packed within the span of about three hours. That night, while sipping homemade mulled wine (while the hotel owner is out on the porch pounding some Hamm’s, ya know, just in case they need anything), Brayden plays an old standard* that Kate’s dad used to sing to her mom, and eventually Kate and Brayden start canoodling. The hotel owner comes back in and does a humorous double-take.

ACT III: SCENE I: The Crisis and The Climax

Cut to The Next Morning. Brayden finds a note from Kate, who left during the night. She is confused and doesn’t want to make things weird, so she happened to book an early flight back to LA. Brayden broods for a bit, then has a pep talk from the hotel owner. Once convinced to Go After Her, Brayden hitches a ride with the hotel guy in his 2006 Dodge Ram to the Manitowoc Airport.

Kate, meanwhile, is arguing with the gate attendant (played by Rob Schneider for some reason) who looks suspiciously like Santa Claus, because her boarding pass is coming up as invalid. At the same time, Kate’s cryptobro fiancé (played by Pete Davidson) Has Suddenly Just Flown In From New York Once He Heard That Kate’s Flight Was Diverted.

Brayden arrives at the gate just in time to see Cryptobro apologizing and offering an NFT of the Enchanted Rose from Beauty and the Beast to Kate as an I’m Sorry/Christmas present. Kate ponders the NFT and looks up to see Brayden, then suddenly remembers that he had explained how the Crypto and NFT market was a Complete and Total Scam: and even though she has four advanced degrees couldn’t see through it being blinded by her desire for Stability With The Right Sort Of Failson From A Well-Known Family (where else do you think Binancébro got his start?). She suddenly comes to her senses, and with a "You can’t blockchain me down!" tosses the cryptobro’s phone into the trash, and heads for Brayden with the old standard* playing over the airport speakers. Irate NFT Guy starts coming after her until he is hit in the head with a can of Hamm’s from Hotel Owner Guy Who Is Also A Part-Time TSA Agent To Cover The Bills (how the hyeck didja think Braeedin gaht through so faest?), then trips over Rob Schneider’s strategically-placed foot.

Kate and Brayden kiss under another strategically-placed mistletoe that was previously Chekhov’d in the scene where they arrived in Manitowoc.

Cut to: One Year Later

Brayden is happily pursuing a travelogue career with Wisconsin Public TV. He plays cello and piano most nights at the Manitowoc Motel. He is now married to Kate, who got out of the Big Investment Bank to start her own firm, which is now a principal and prosperous investor in the Manitowoc Motel, which is exploring expansion and franchising into Sheboygan, Menominee, and even Milwaukee. Hotel Owner Dad is financially set for life as a minority owner of Manitowoc Motels, Inc., and he is shown waving through the window as he’s still out ice fishing. NFTbro is currently on the run from the SEC, the FTC, the FBI, the New York Five Families, the Russian Mafia, the Triads, and the Church of Scientology after his cutting-edge NFTventure went belly up.

Cut to Rob Schneider dressed as Santa, who with a wink walks off into the snow.

Roll Credits with the loving couple’s favorite old standard* playing over them: