Today, I'll be looking at this try from a 2014 match between Ireland (home team, in white) and South Africa (green) as an example of how to kick into space. As we know, there's no forward pass in rugby. In its stead, a well-placed kick can function in much the same way. The big difference is that, of course, there's no such thing as an incomplete kick. As long as the ball is inbounds, it's live and recoverable by anyone who was onside.

Here we'll start with a shot of the setup of an attacking scrum to Ireland about 40m out from their tryline and 15m from the right sideline. They are setup with their backs, save Bowe, to the left - a super standard setup you'll see 95%+ of the time in this situation. 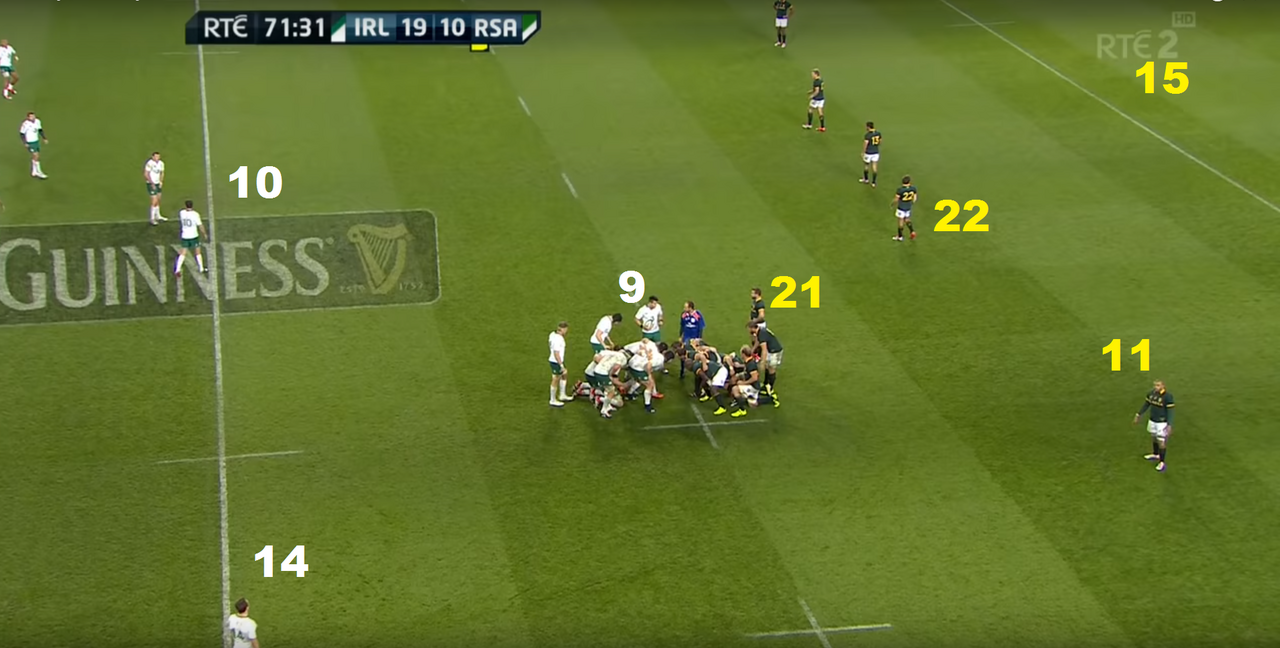 A real quick detour - I am definitely an Ireland homer. It's no accident this try is scored by my favorite ever Ireland player. But let me for a second single out Bryan Habana. Habana is one of the greatest wingers of all time. In his day, he was the fastest man in rugby. He shares two very impressive records with Jonah Lomu - most tries in a single World Cup* (8) and most career World Cup tries (15). He also is the Tier I all-time try leader with 67 (Japan's Daisuke Ohata has a very nice career total of 69).

"Big deal," you may be tempted to say, "of course he scores a lot if he's that fast." And in some cases you may be right. It is very easy to put the fastest guy you've got out on the wing and say "Here, take this and run like Hell." Bryan Habana was also very good on defense. He was 2007 Player of the Year, and you don't get that by being one dimensonal. Habana was a fantastic player, one of the best in his position ever. Nothing but respect for him from me.

Now, back to him getting burnt. 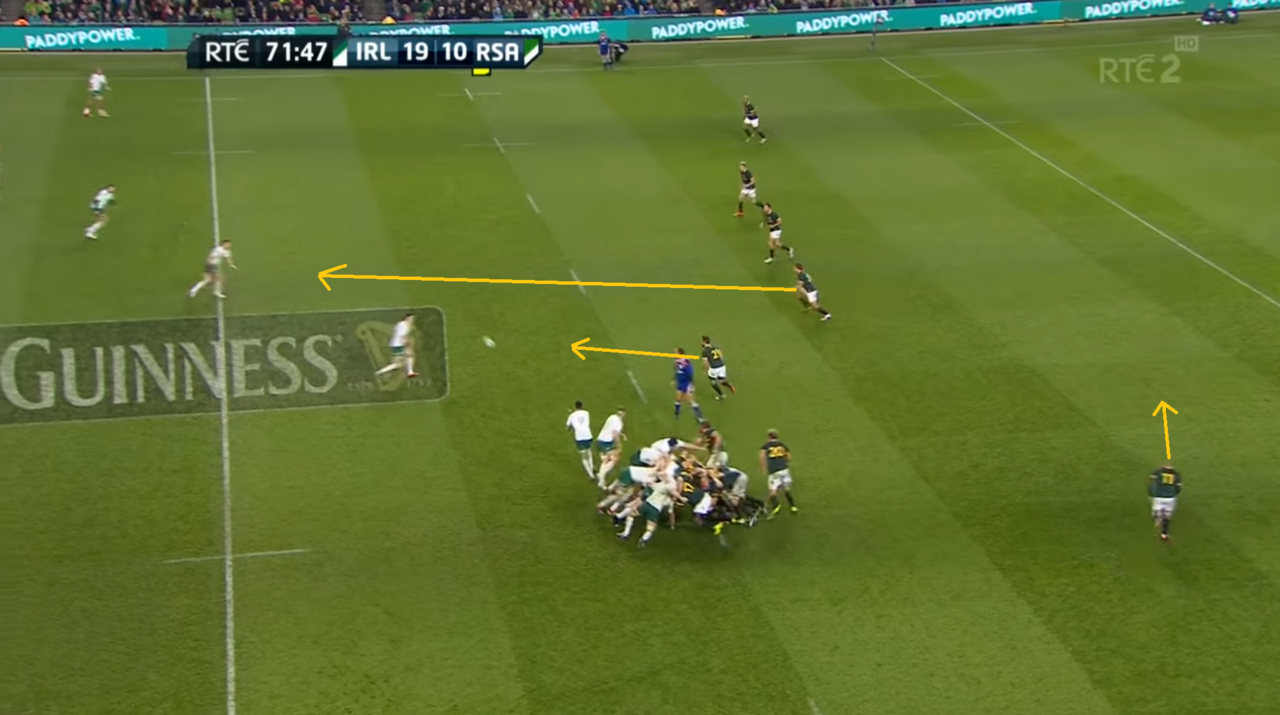 Reinach comes up to cover Sexton. I'm not going to say I've never seen this, but it is a bit of a rare decision. The defending scrumhalf usually mirrors his or her counterpart at the scrum, pressing the pass and preventing a run. Covering the first receiver (Sexton) puts the scrumhalf (Reinach) at two disadvantages. First is purely a question of distance - that's a long way to go. This is why he's charging up so hard, simply to get there in time to be in the the play in any sort of meaningful way. This leaves him vulnerable to the second thing - Murray might have tried to throw a dummy and run in behind the in gap he left. Reinach had to time this run well - get a good enough jump to actually pressure Sexton at all, but not leave so early that Murray has time to read the gap and ad lib running into space. 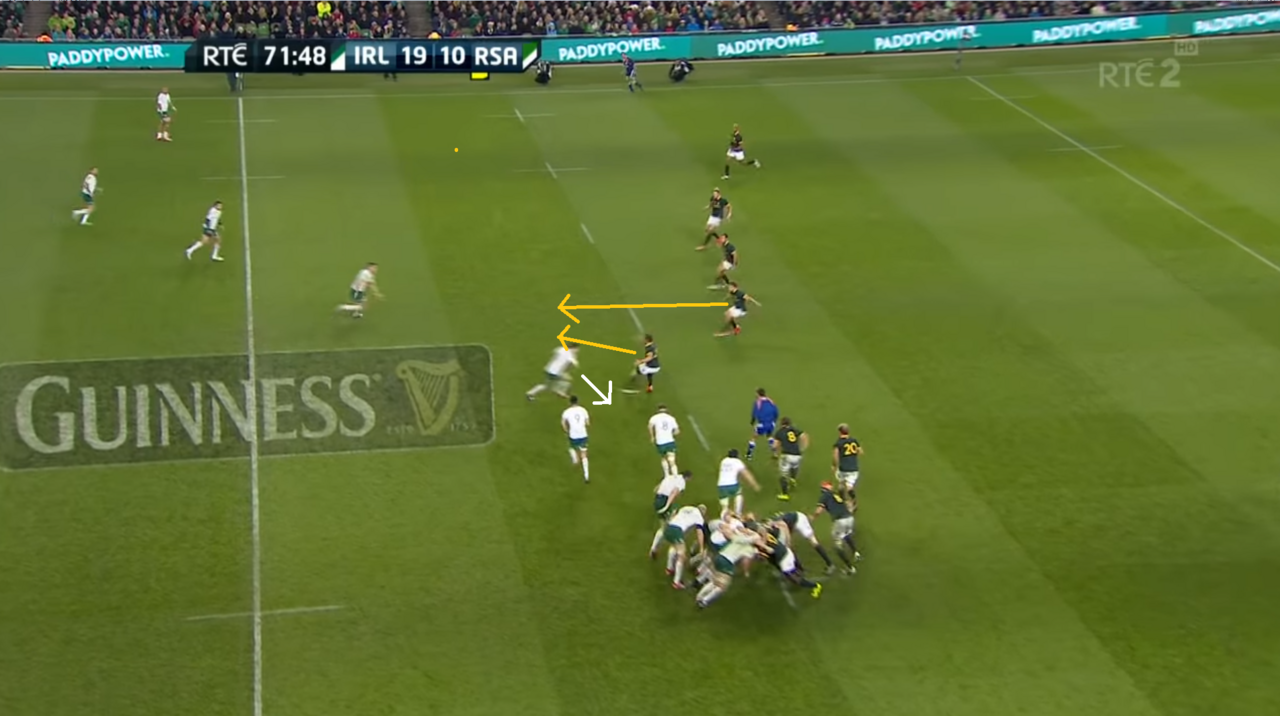 Reinach comes up hard to cover all of that ground, and Lambie has floated onto the second receiver, inside center Robbie Henshaw. In the meantime, Habana has begun to float away from his sideline towards a more central spot on the pitch. This is pretty standard MO for a wing on the weakside (that is the side of the field play is flowing away from). Rather than stand out on the fringes doing a whole lot of nothing, he floats inward to help the fullback, who in turn can float a little more towards the strong side.

However, Sexton uses Reinach's momentum against him, sidestepping him and hitting the gap left in the defensive line. The defensive risk has not paid off. This move depends on Reinach at least containing Sexton, if not tackling him completely. Basic, basic defense is coming up together in a flat line precisely because you cannot leave gaps for the offense to exploit. Strength in numbers and all that. You can see Reinach and Lambie putting on the brakes hard to try to turn around and pursue Sexton. The South African 8 , Duane Vermeluen, has unbound from the scrum and made the covering tackle.^ 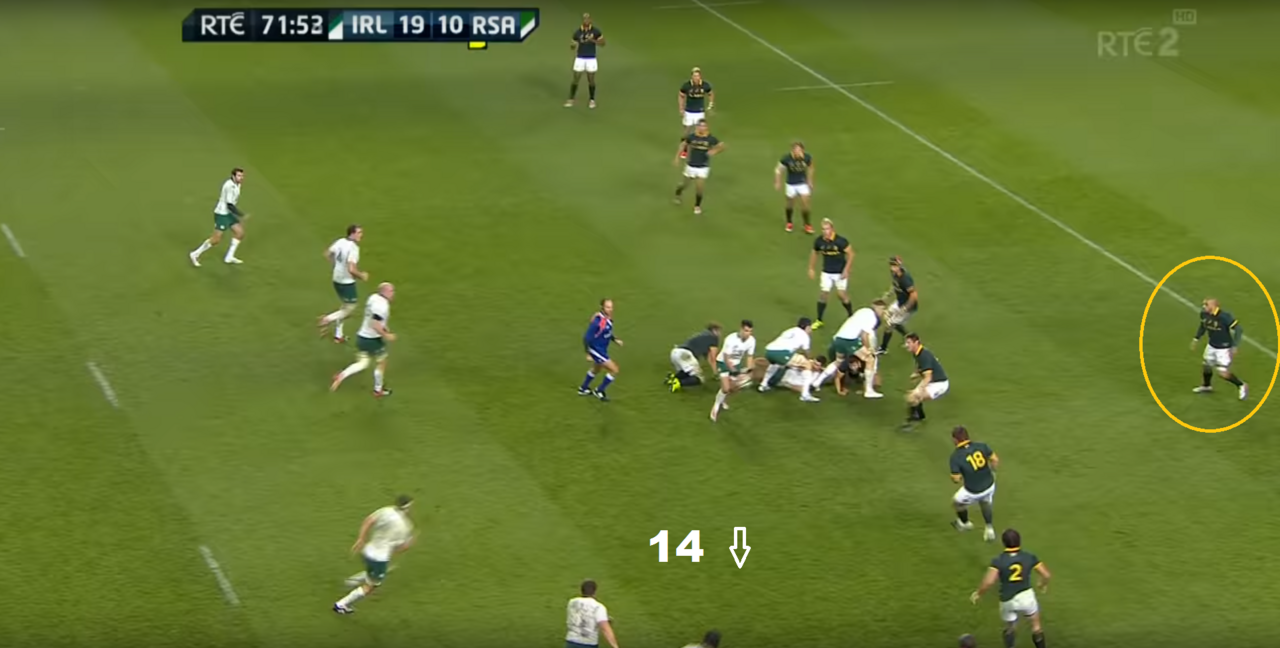 From the ruck, the South African defense is in a bit of a scramble to get set. We can clearly see Habana a few meters behind the ruck trying to decide where to go. Right now he's not in a very useful position. He's not in the defensive line and he's not tracking back to his position opposite Bowe. At the same time, le Roux (off screen at the top) hasn't shifted to a more central defensive position. He's still playing as though the strong side is Ireland's left/his right instead of readjusting to a ruck center with the Irish offense split rather evenly left and right. 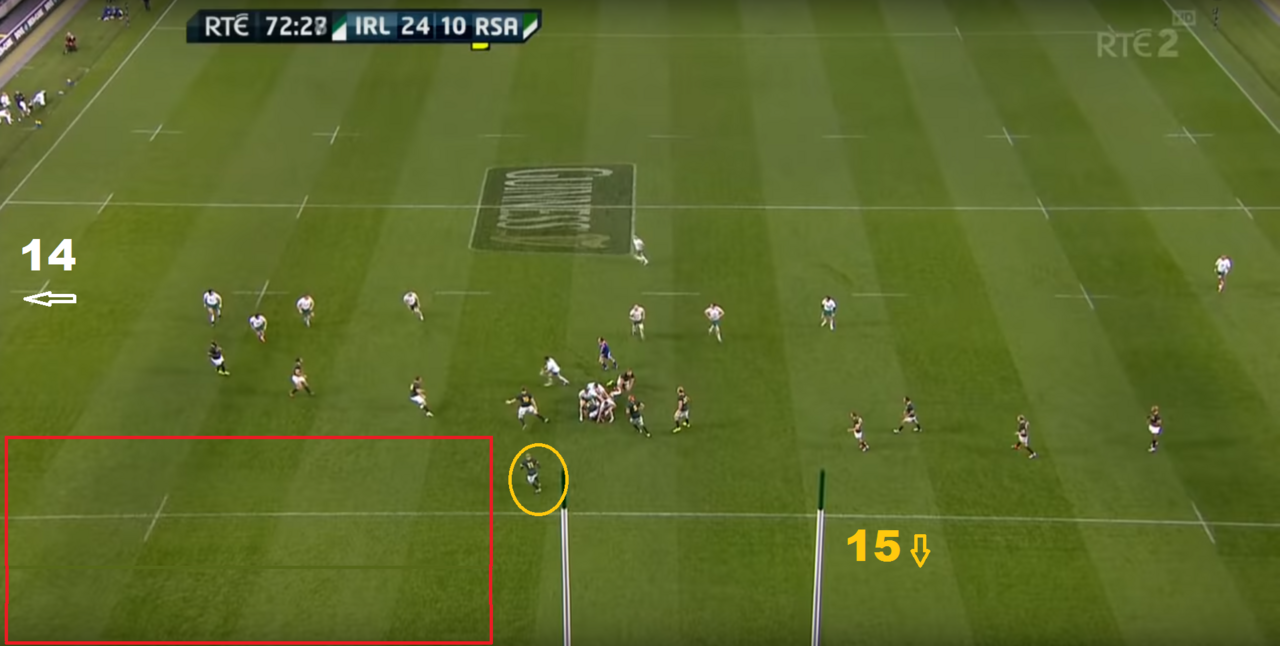 The great temptation for any scrumhalf running up to a ruck like this is to call for a quick ball to the forwards. Keep ramming it at the line while the defense gets more and more harried. Chances are you'll break the line, or get the defense to give away a penalty in the mess, leading to a chance at three points.

To his credit, instead of rushing to the ruck with a predetermined next move, Murray takes just a little time to survey the field in front of him . He identifies the massive gap left by Habana and le Roux and puts a kick into that space. I can't get a glimpse of Bowe in any of the angles, but safe to say he's giving some sort of signal to Murray calling for the ball, hopefully not alerting Habana that the gap exists. Usually this is waving an arm and yelling something (we use "FIRE!" but anything easily yelled will work). 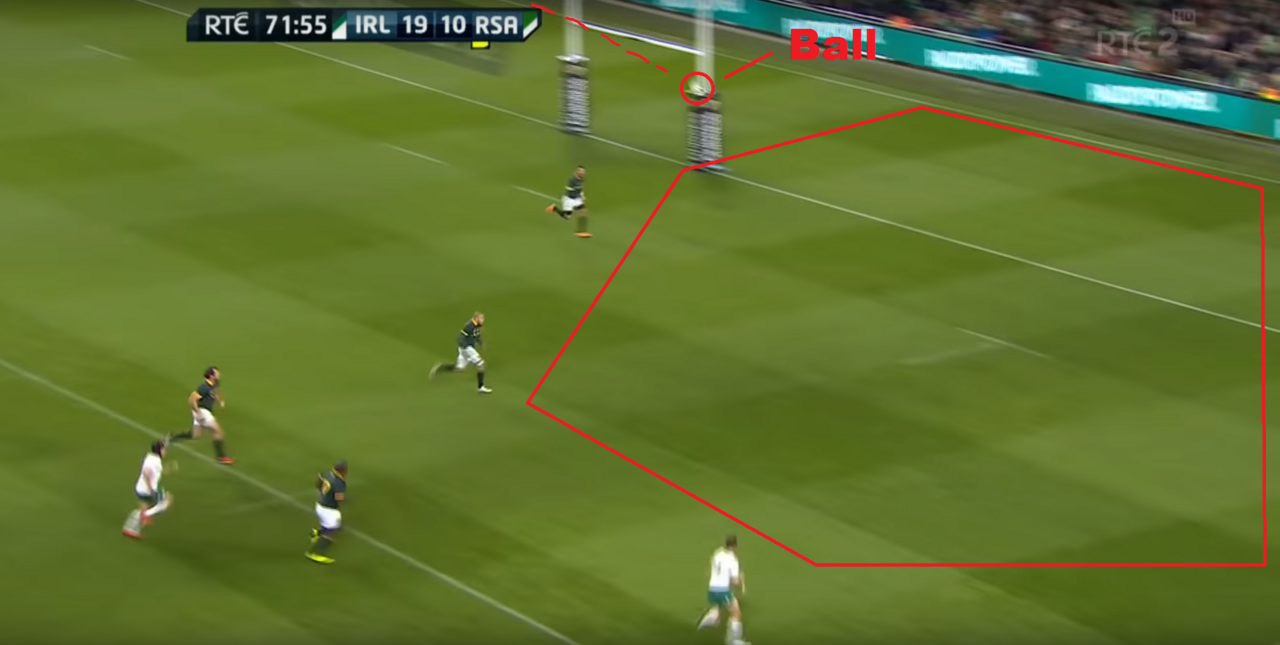 Ideally, this kick goes straight to hand because a rugby ball is a bit unpredictable on the bounce, but luckily Bowe is able to collect. At this point, there's nothing between Bowe and a try. Habana does his best to hustle back and does get in a tackle that prevents Bowe from touching down more centrally (and there's always like a 1% chance of causing Bowe to drop the ball). But the damage was done well before the try was scored.

Now scroll back up and watch the clip again and see if you can see things developing in real time. I'm interested to know if this has helped you see how things unfurled.

*Julian Savea (NZ) has since also scored 8 tries in a single World Cup.

^WTF kind of illegal bind was that at the scrum?!