When a team gets a penalty*, they are awarded a penalty kick. The referee will stick one arm up in the air, towards the team that benefits, with the other arm indicating the type of penalty. They will also stamp their foot to show where the penalty occurred, creating "the mark". 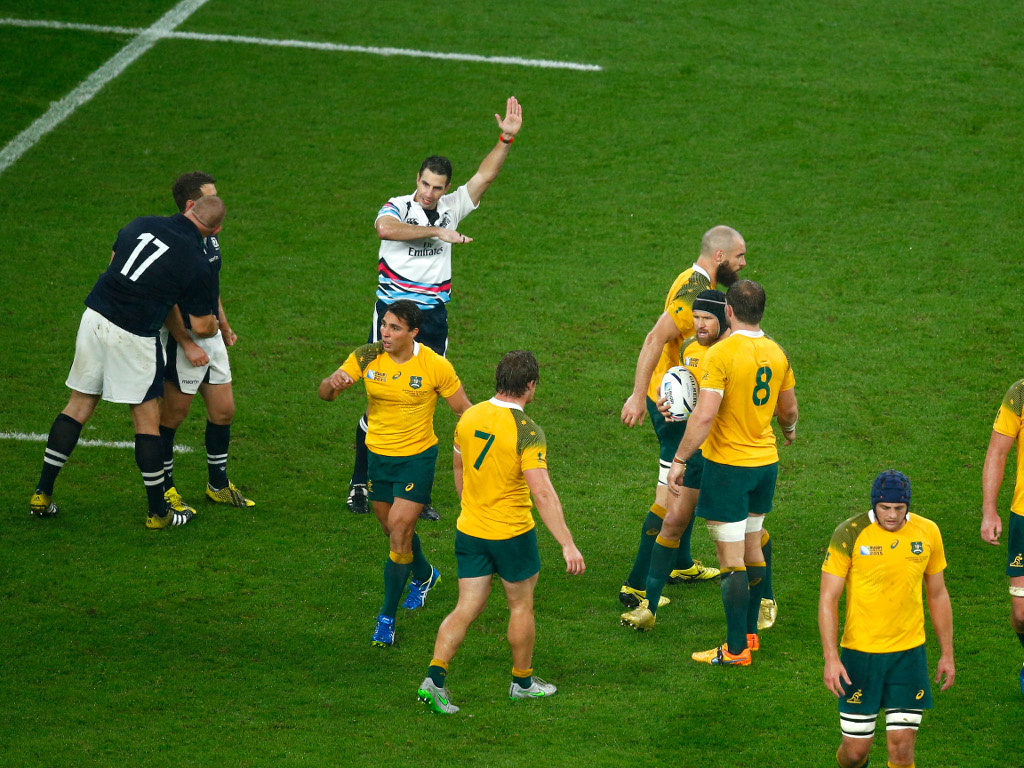 This comes in three options^: a kick at goal, kicking for touch, and the tap-and-go.

A couple of broad points that cover all three options:

This is really the most straight forward. If it goes in - 3 points. If it stays in play - live ball. If it goes out of bounds - 22 drop-out (which we will cover in some future installment). The only real wrinkle in this one is that the kicker must tell the referee that they intend to have a kick at goal first. The referee will then also signal for a kick at goal so the defense is aware. If they don't, it's a penalty against them. 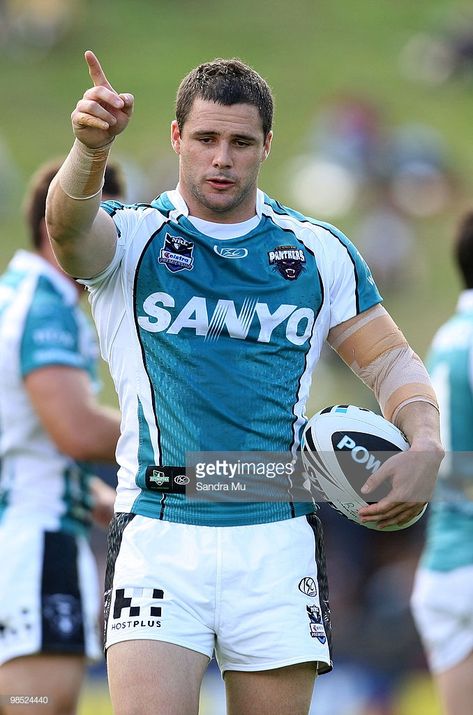 Player indicating he intends to kick for goal 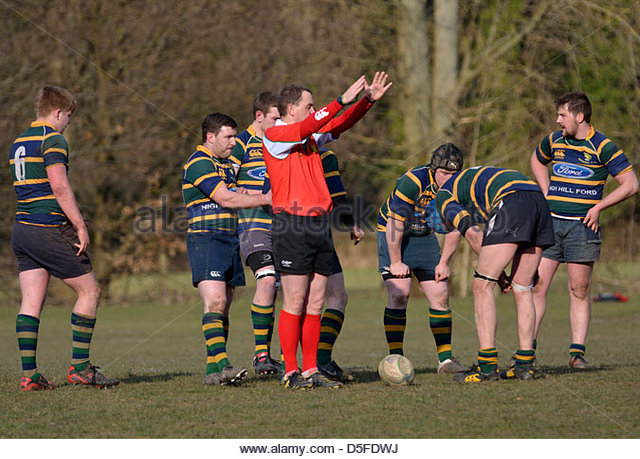 Referee (red) signals for a kick at goal

Have a look at this monster kick from Wales in 1986, usually called the longest penalty ever.

During open play, a ball out to touch (crossing the sidelines out of bounds) is a turnover and the game is restarted with a throw in by the defending team.

However, a penalty gives a team the option of kicking the ball out of bounds, and then they get to do the lineout from where the ball crossed the plane. The assistant referee will raise his/her flag and make a mark at that location. The trade off is picking an angle to kick it as far as possible and still get it out of bounds.

As with the kick for goal, if the ball stays in play, it's a live ball. You can just make out at the end of the gif the player in red jumping. If he were able to keep the ball in play, as I said - live ball. When defending a kick for touch, you'll want a player or two along the touch line in case the kicker doesn't quite get enough oomph on it.

As a counterpoint, if you're the kicking team, you'll want to send a chaser up the channel along the line you're aiming at, just in case. Usually, that person will be running for naught, but very rarely they'll be needed to make a tackle.

Two minor notes - there cannot be throw-ins inside the 5m line. Any ball that crosses between the touch line and 5m is taken at the 5m mark. The offense cannot take a quick throw-in off of a penalty

I'm going to break how this one is used down into two groups - low-level amateur rugby and the pros.

In the level of rugby I play(ed), scrums and lineouts can be...unreliable let's say. Also, your kicker may or may not have the best leg or accuracy. In this case, a tap-and-go is usually a little safer to use as it protects possession. Someone, usually the scrumhalf, will stand on the mark and kick the ball to themselves. This is done in one of two ways:

Regularly with less experienced players, they will hold the ball and just tap the ball against their foot without actually releasing the ball. A generous referee may allow the kicker to re-take the penalty, but he or she can also call a penalty on the kicker and a turnover.

Assuming, the kick is taken properly, this part looks a lot like the wall in a mosh pit. The defending team has retreated 10 meters and start advancing as soon as the ball is kicked. At the same time, a pod of players from the offense start charging forward when the ball is kicked, who take a small pop pass from the scrumhalf to get the ball. There is a big collision and play continues as normal from there. (NB: You can not be running forward before the ball is kicked. That's considered dangerous play as one team has more time to get some momentum going than the other. This is a penalty.)

The other option is a quick kick, which is what you'll see in the pros. You almost never see the wall-style tap-and-go in the pros. For one, the kicker and the lineout are much more polished and reliable. Secondly, the players are so much bigger and stronger that this doesn't accomplish much more than subjecting the players to unnecessary physical toll. That's not to say you don't see quick taps at lower levels. You most certainly do. I've taken many myself.

The gif above is a quick tap. You can see James Lowe fulfill the two main obligations of taking this penalty:

Remember above when I said that teams must retreat 10m when defending a penalty and quick teams can take advantage of it? This is how. The scramble to get back 10m often results in a little confusion. (NB: NEVER TURN AROUND TO RETREAT 10! ALWAYS BACKPEDAL!)

Notice how many of the Bath players are not facing the ball or hustling to get back in position. Anyone not back 10m (or on the line in this case) is ineligible to partake in the play until they've reached that threshold and must just let him pass. Law 20.12-13

12. When a penalty or free-kick is awarded, the opposing team must immediately retreat 10 meters towards their own goal line or until they have reached their goal line if that is closer.

13. Even if the penalty or free-kick is taken quickly and the kicker’s team is playing the ball, opposing players must keep retreating the necessary distance. They may not take part in the game until they have done so.

Lowe saw the Bath defense lollygagging around and took advantage to score a try. The danger here, of course, is that there's no real time to him to yell for his teammates for support. Had he not scored he may have been without support and turned the ball over in the tackle. That's why you always gotta be on your toes, both on offense and defense, during a penalty.

These are the big basics of taking a penalty. Things like location of the mark, score, time remaining in the game, strengths/weaknesses of the teams, and quick thinking will all come into the strategic side of selecting which option to choose.

*Most common infractions resulting in a penalty: offside, not releasing/not rolling away, improper rucking (in from the side, off your feet).
^A team can also opt for a scrum in lieu of kicking. Usually only selected when one's scrum is blowing the other guys out of the water.