Back in October, Washington Post political columnist Dana Milbank made a promise to his readers - Donald Trump would not win the Republican Party's presidential nomination, or Milbank would literally "eat his words" by consuming the newsprint on which they were published.

"Finally," readers may have thought, "journalistic accountability!" Well, as you surely know, Trump effectively sewed up the nomination last week and Milbank - a man of his word - held to that promise. Live-streaming on Facebook, the columnist ate a nine-course gourmet meal, prepared by one of Washington DC's top chefs, that incorporated newsprint into each presumably delicious course.

"Wow", you might be saying, between bites of untoasted Pop Tart, the flavor you bought because they were on the closeout shelf at Target, "that's integrity". [wiping away crumbs] "Finally Beltway insiders understand that they've long been missing what motivates the American public, and they're recommitting to getting the facts right next time. Also, the literal consumption of newsprint totally isn't a metaphor for their hapless clinging to the dying structures of a changing medium".

What? No. That's not my takeaway at all. I'm sitting here thinking hey - I'm a part-time niche sports blogger, and it's time I start behaving like the media elite that I am. I'm wrong all the damn time. I'm tired of my mistakes being bad things. If I'm wrong, we're gonna treat it like an act of god and then celebrate it!

So, with that, I've got some predictions for the 2016 college football season, and I. Will. Be. Held. Accountable.

BOLD PREDICTIONS FROM YOUR PAL ACTIONCOOKBOOK

Prediction: The Big XII will expand to 12 teams, by inviting BYU and Cincinnati

Stakes: If this doesn't happen - likely because of the opposition of Texas and their refusal to modify the Longhorn Network - I will eat at a Longhorn Steakhouse. I will celebrate the Big 12's offensive, wild heritage by getting the Crispy Jalapeno Shooters and the Outlaw Ribeye. I will wash down my contrition with the Jack & Honey Blackberry Lemonade.

If the server asks "will there be anything else?", I'll say "yes: a promise to do better for my readers".

Whew. It feels good out on this limb. I feel like the guy from The Newsroom. Let's keep this rolling. What about the Big Ten?

Prediction: after losing a record amount of talent to the NFL Draft this year, the Ohio State Buckeyes will finish third in the East, falling behind a stable Michigan State and a finally-insurgent Michigan.

Stakes: If Ohio State does win the division, I will nod to the legacy left by former Buckeye and newly-minted Pro Football Hall of Famer Orlando Pace, and I will make pancakes. I won't just make regular pancakes, though. I'll make them in the shape of Script Ohio. I'll eat them quietly in the dark, without butter or syrup, thinking about how I've failed you all.

I didn't say I couldn't put whipped cream on them. That was never part of the deal.

Man, I am accountable to you guys. You want more? I got more.

Prediction: The 2016 college football National Championship will be won by the Oklahoma Sooners, led by Heisman trophy winner Baker Mayfield.

Stakes: If Oklahoma doesn't win the title, I'll, uh... hold on. [dead air] Okay, I'm back. Like any nationally-prominent columnist worth their salt, I spent 30 seconds googling "foods Oklahoma is known for", because those lists are always right, and I came across a smoked bologna sandwich and fried okra. Uh, sure? Yeah, those sound good. I'll eat those. I'll use the okra pieces to spell out "Picking A Team That's Not The Favorite But's Probably In The Top 3 Is Every Reporter's Favorite Way To Pretend They Actually Did Research And Aren't Just Bullshitting You".

Geez, this is a lot of okra. Y'all want some of this? I don't think I'm gonna finish it.

Prediction: LSU will win some games this year, probably.

Stakes: If they do, the ATVS crew should make me dinner. C'mon. I see y'all out there. Hook me up.

Prediction: The Cincinnati Bearcats will rebound from last season's shakiness and win at least 9 games.

Stakes: Alright, let me be clear here. You're out of your damn mind if you bet anything on that team. They're the purest expression of "we have no idea what the hell Tommy Tuberville teams are going to do". They're his thesis. They're Mr. Tuberville's Opus. I will not be surprised if they win 4 games or 11. No idea. So I'll eat Skyline Chili either way. It sounds like I'm putting up real stakes. It sounds like a dare. But it's fine. I usually eat it twice a year and regret it afterwards, but it's fine. It's not good or bad. It's the Bearcats, man. 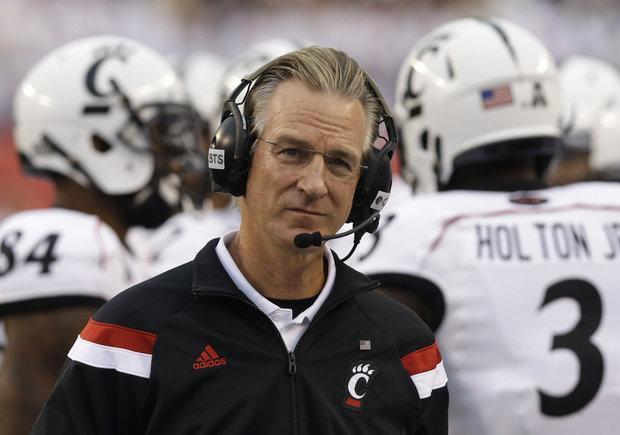 Prediction: The Purdue Boilermakers will not make a bowl game.

Stakes: We'll all be dead if I'm wrong, so it doesn't matter what I promise. I'll eat a unicorn.

Alright, I need one last, final, big-fish prediction. Wait, I've got it!

Prediction: Notre Dame will not win the National Championship...

It's a really nice hat.