THE NINE DUMBEST THINGS IN THE RUTGERS REPORT ON KYLE FLOOD

THIS IS SOME EXCELLENT IDIOCY

Share All sharing options for: THE NINE DUMBEST THINGS IN THE RUTGERS REPORT ON KYLE FLOOD

Rutgers Head Coach Kyle Flood just got suspended for three games and fined $50,000 for directly contacting a professor who'd given one of his players a grade that made him ineligible. Because this combines my two primary areas of expertise - mediocre legal analysis and gawking at a football disaster from a safe distance - I have brought you the nine dumbest things that transpired according to the released report. In no particular order:

1. Kyle Flood Wants You To Know He's Breaking The Rules On Purpose

When Kyle Flood first reached out to this unnamed professor, he did so from his personal email account. It was entirely possible that he did so on accident, perhaps sending the email from his phone without realizing which account it was coming from. Of course, it was also possible he did so to purposefully avoid New Jersey's Open Public Records Act.

Great news! Now we don't have to wonder which one it was. This is one of the dumbest things I've ever seen committed to a permanent electronic record. It's like leaving a knife in your carry on bag at the airport with a note that says "LOL I KNOW THIS ISN'T COOL BUT WHATEVER."

2. This Is Definitely The First Time Kyle Flood Has Done This

On one hand, I'm inclined to believe this because if he'd done this before, he'd probably have been, oh, say, even slightly calculating about it this time. On the other hand, Kyle Flood has been the head coach at Rutgers since 2012. That's a really long time to supposedly never contact a professor about a player's grades, especially given the following.

Look, everyone agrees that mandatory training sessions are incredibly boring and frequently have a ton of information that will never apply to you or your job. The snacks, if any, are guaranteed to be some garbage like a lemon bar that tastes like playground sand mashed together with a half-melted jellybean. And by skipping these training sessions, Kyle Flood did at least buy himself the appearance of ignorance. Maybe that's ultimately better.

Or maybe Kyle Flood wouldn't have gotten into this whole mess if he'd sat in that sad conference room for two hours.

4. Meet Me At Location Delta

If you think it's perfectly okay to talk to a professor about how a player can get a better final grade, you'd probably go to that professor's office on campus or invite them to come to yours. If you want to pretend that you're a spy handing off a package of microfiche and it's all very dangerous and sexy, you meet somewhere else, like in front of a public library. CHECK FOR SNIPERS ON THE ROOFS.

Maybe that's unfair. Perhaps the Princeton Public Library was a more convenient location for the professor, and Kyle Flood was being thoughtful, not sneaky.

Consider this: if you're a college football coach for a Power 5 school, and all it takes for you to be incognito is not wearing your school's apparel? Your team is probably pretty shitty.

The portion after "afford the Student an opportunity to" is fine. It's the redaction of a single letter after "complete" that's very confusing. To the lawyer who made this decision: you do realize this is the easiest game of Wheel of Fortune possible now, right? There are only two possibilities, and I'm not really sure how hiding the tense of this verb does anything. Unless you're trying to trick us into thinking we've traveled back into the past WHOAAAaaAAAaaAAAAAaa

7. Having Learned Of His Error, Kyle Flood Chooses The Cover-Up 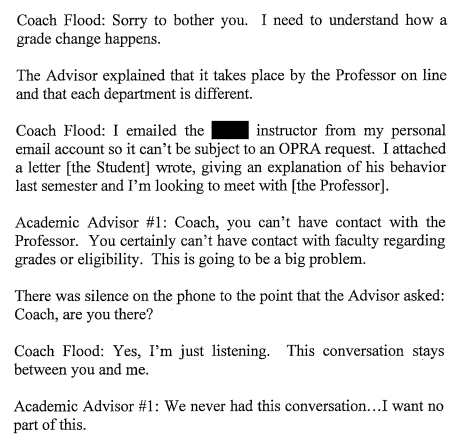 8. This Shit Didn't Even Work

Despite his buffoonish attempts at handling the situation quietly and smoothly, the professor in question agreed to let Flood's player complete an additional assignment after the course was over, potentially giving him a chance to become eligible again. This was the result.

YOU BROKE INTO THE CASINO VAULT AND FOUND OUT ALL IT HAD INSIDE WAS PAPER CUPS AND COUPONS FOR HARDEE'S.

Since the news of this then-potential violation broke, two Rutgers players were arrested and charged in connection with a home invasion that took place in April 2015. Four other players were charged with assaulting a Rutgers student around the same time; one of those players, Nadir Barnwell, was the student Flood tried to get eligible in August. His star receiver, Leonte Carroo, just got charged with assaulting a woman less than an hour after Rutgers lost to Washington State last weekend.

A three game suspension and a hefty fine - Flood makes less than USF's Willie Taggart, Memphis's Justin Fuente, or UConn's Bob Diaco - suggest Rutgers is taking this seriously. Given everything else that's happening with the program, you'd think there be a strong case for termination with cause. (And that still may be coming!)

But, as of now, Kyle Flood will miss the games against Penn State, Kansas, and Michigan State, and then be back on the sideline for Indiana. Assuming he doesn't send someone an email with "I'm using a code word here so that nobody knows 'crayon box' means 'embezzled funds'" in it is somewhere.