TRULY ONE OF AMERICA'S BOLDEST LEADERS

Share All sharing options for: ALL HAIL EMPEROR NORTON

You, a friend, or Dennis, the guy at work who insists on bringing up politics even though you're just trying to get your lunch out of the office fridge in peace dammit, have probably decried America's two party system at some point. The usual proposed answer to this status quo, on either side of the spectrum, is to support a third party. This approach has a number of challenges: it requires massive fundraising and/or grassroots organization, has an uphill climb in terms of name recognition, and risks having its success co-opted by the existing parties.

But on this day in 1869, one man found another way to break the stranglehold enjoyed by Democrats and Republicans: he simply used his self-granted powers as U.S. Emperor to abolish the parties altogether. 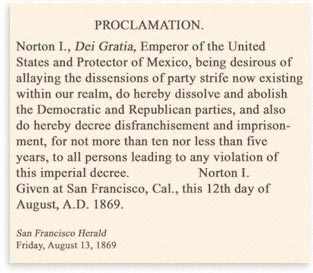 Yes, Emperor Norton, a man who came to the U.S. from South Africa rich with inherited wealth, lost it all on Peruvian rice investments, and then declared himself ruler of the entire country. This proclamation came after Emperor Norton ordered the dissolution of Congress in 1859, which went ignored. You can't say the man didn't try smaller steps at first. And though his efforts failed, I hope we can learn a valuable lesson from our country's greatest Emperor: the best way to settle an argument is by seizing power, even if it's fictitious.

In that spirit, we issue the following

Every Day Should Be Saturday, Emperor of College Football and CEO of Cash Money Records, being convinced that the inherent financial conflicts and flimflammery endemic to collegiate athletics oversight render the notion absurd at best and arbitrary at worst, does hereby dissolve and abolish the National Collegiate Athletic Association, and also does hereby decree a fine of $50,000, payable to us in cash, and having to get dunked on by Vince Carter, for all persons violating this imperial decree.