THE STATE OF GEORGIA DECLARES WAR ON SPENCER HALL

FINALLY, THE GOVERNMENT STANDS UP TO THE TRUE ENEMIES OF DECENT SOCIETY

Share All sharing options for: THE STATE OF GEORGIA DECLARES WAR ON SPENCER HALL 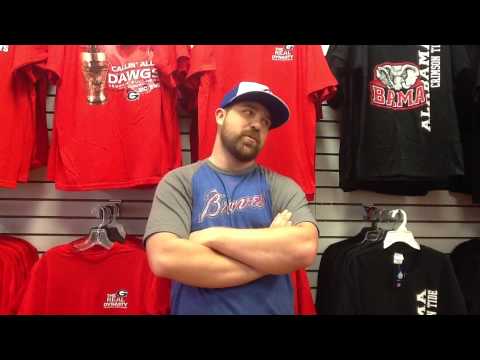 Look at this smug little shit, who is, again, Spencer Hall. So proud of his Braves shirt and his repurposed Sports Authority display racks, not even concerned that he got one of college football's best and most exciting running backs suspended over some nonsense.

Well, Spencer, the other shoe just dropped, courtesy of the whole dang government of Georgia. Thanks to the Todd Gurley Law, your days of treating a player's eligibility like your personal plaything are OVER.

The law has two possible penalties, one criminal, one civil, Fleming said.

"We plugged it into a law about alumni being overzealous," he said. "Now it's a misdemeanor of a high and aggravated nature. It can be up to a year in jail and a $5,000 fine.

"On the civil side, the university can sue the person who does this for any damages sustained, like losing a TV contract, not going to bowl games."