To wit: after getting to the Meineke Car Care Bowl in his first season in Tampa, Holtz finished his second season with separate losing streaks of three and four games a piece, taking a long tumble through the Big East on the way to 5-7. The 2012 season, Holtz's third and final, was worse. The Bulls would only win one conference game (a brutal 13-6 win over lowly UConn), lost QB B.J. Daniels to an ankle injury in that same game, and suffered defeats at the shaky hands of Temple, Ball State, and Syracuse. The unmitigated disaster of a 3-9 season ended with Holtz's career in tatters, the USF program entering a death spiral it's never really recovered from, and a 27-3 season-ending loss to Pitt where the Bulls tallied just 117 yards of total offense.

In short: Skip Holtz to USF was bad, ended badly, and was good for no one in the long run except Maikon Bonani, the kicker who scored most of their points. However, there was one highlight to the Skip Holtz era, the lone win over a ranked team representing the single cherry Jelly Belly in a sea of generic-grade black licorice jellybeans.

And who, on September 3rd, 2011, wrote "The Cake is just around the corner!" to USF fans, giving the falsest of all false hopes for the future of the program?

Notre Dame, step to the mic, please. There are hilarious turnovers, and there are turnovers that, when committed, signal that your team is done before they even got through their first 25 scripted plays. There's the pick six on the first play of the game; the hilariously blown coverage on your first defensive series; the stunning early punt return, which for some reason always means you're done, just destroyed before you even get a chance to hit the second quarter and regroup.

None of them come close to the comedy and finality of a 99 yard fumble return the other way, particularly when it's done against a team you suspect will do nothing at all to hand that momentum back to you. If Skip Holtz's USF teams had a talent, it was this: doing nothing at all. They just stood there, and played telephone pole defense. You were going to try and actually do something, and when you did, they'd be happy to let you wrap the Lamborghini around them.

It's also hard when you don't have a set QB, or a QB you feel confident in, or when the QB you thought you were confident in throws into the redzone like he's playing Pop-A-Shot and trying a back-footed fadeaway jumper. You have to admit the telephone pole's in great position here: everyone except the little slant route underneath is covered, and even if Dayne Crist throws it his receiver will diiiiiiiiiiiiie upon impact with a defender. It's not even like he's under a ton of pressure, though. He just hits this pass like your grandfather aiming for the toilet: he can see the back of the rim, and yet still shorts it and hits the shag bathmat instead.

No, we're not through the turnovers, which as you can guess accompanied a truly maddening stat sheet. Notre Dame had 508 yards of offense to USF's 254, but gave up five turnovers to South Florida's zero. They turned the ball over in the redzone three times, and missed a game-tying field goal on another redzone possession. Notre Dame lost another touchdown on a holding penalty, and gave up cheap yardage to a stuttering USF offense with back-to-back facemask calls on the Irish defense. USF painted bullseyes on Notre Dame's toes, and the Irish emptied the whole clip with a smile on their face.

There's a highlight reel of this game on Youtube set to "Wake Me Up" by Evanescence, and we want to hate that but it's just impossible for two reasons. First, the call-and-response in that song is so bad you start putting your own lyrics in like this:

wake me up inside

wake me up inside

[THIS BED IS NICE]

call my name and save me from the dark

bid my blood to run

before i come undone

save me from the nothiiiing I've become

We can't hate that. We also can't hate someone making a lowlight video of their own team with the lyrics "save me from the nothing I've become." It calls to the soul, particularly when Will Muschamp just got done running his best Skip Holtz imitation into the smoldering ground in Gainesville.

Oh! Almost forgot, here's turnover number five. It's Tommy Rees doing everything wrong at once. He's throwing across his body into a bracketed receiver floating across the middle, and doing it late with an open man in the flat. There are moments in the highlights, really, when you can see why people thought Tommy Rees would be kind of a badass at Notre Dame. No, really, they're there. There's also this.

In case you were wondering, this is the game the computer makes you play when you've won too many in a row, and the algorithm rebels and just throws every fuck-you move imaginable at you. A two hour rain delay; five turnovers; an opponent with a pretty good defense and no ability to do anything you didn't hand directly to them on offense; multiple turnover-prone quarterbacks; turnovers of a nature so crippling that finishing with a 23-20 loss really represents something of an accomplishment.

(But not this face.) 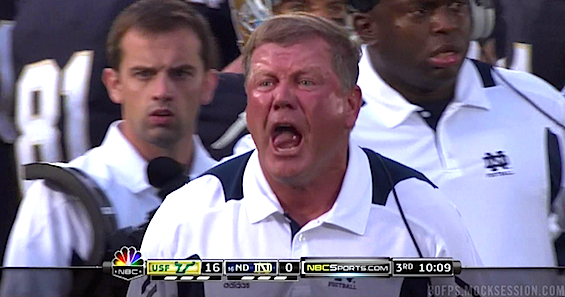