NEWS ANCHOR VOICEOVER: A miracle today in Durango, Colorado, as a former Michigan State and Louisville head coach is rescued from Division II football obscurity, where he was allegedly forced by the actions of a self-proclaimed offensive genius, Coach Robert Pat Bobby Pet, also known as Fayetteville's worst carpool buddy...

JOHN L. SMITH, emerging into the daylight: It's all still here...

REPORTER: We're now joined by a neighbor who watched all the drama unfold. 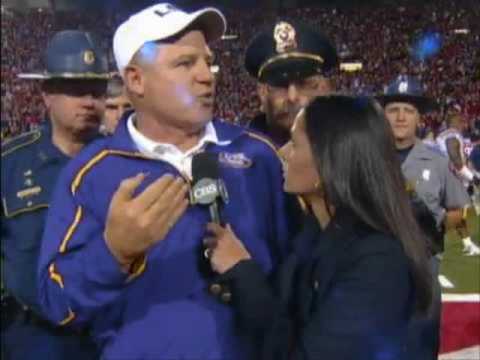 Well, what had happened was...

His old boss did some freaky things...  but reeeeetreads are strong as hell

Got his piss hot!

These retreads are strong as hell..

JOHN L: Oh, Bobby never let us in there, he only took graduate assistants down th-

[later, John L. is watching a rerun of this year's Orange Bowl]

JOHN L: Oh, I get it. Football's about butts now.

TERRY: Turn that off.

TERRY: TURN IT OFF. That man is my nemesis.

JOHN L: Dan Mullen? He seems like a nice guy.

TERRY: Paul Johnson stole my career resurgence. I was supposed to coach at Georgia Tech. We were down to the final round of interviews in 2007. I was about to tell one of my trademarked folksy nonsensical anecdotes, and he runs in and screams "PIMP C OVERDOSED." Rude! And guess who got the job?

THEIR CLUELESS LANDLORD, WHO IT HAS BEEN PREVIOUSLY ESTABLISHED IS MACK BROWN: A third party that wasn't in the story?

TERRY: No! That should've been my chance to get back into big-time football. And look at me, talented, dashing, transcending- ...and coaching on Tuesday nights in Northeast Ohio.

JOHN L: It isn't good to hold on to things like that. Life beats you up. You can either curl up in a ball and die, or you can stand up and say: we're retreads! You can't break us! Tomorrow we are going to put on our fanciest clothes, go down to the biggest sports agency, and do a series of leg and arm poses to project confidence. AGENT, TO RECEPTIONIST: Why are you keeping this important man waiting?

[later, after Terry has charmed the agent by telling a factually-inconsistent 45-minute story about a duck stealing his wallet in 1986]

AGENT: Terry, I like you. I want to send you in for a great job I think will be opening up soon. It's in West Lafayette, Indiana, and-

TERRY: Screw it John, let's go hang out in that bunker.