WE'RE HERE TO SAVE THE COLLEGE GAME

Share All sharing options for: A MODEST HOOPS PROPOSAL

With the NCAA men's basketball tournament swinging into gear this past weekend, there's been a great deal of talk about the state of the college game, specifically the deleterious effects of the "one-and-done" system. Some say that players should be allowed to go directly to the NBA, arguing that the current age limit is an artificial barrier to competition, reducing risk to the owners at the cost of players' financial security (these people are correct).

Others say that the age limit should be raised, preventing teams like Kentucky from loading up on one-year phenomena like Karl-Anthony Towns and allowing players to develop further. (Because facing developed Kentucky sophomore Karl-Anthony Towns is better, apparently.)

Get this scary man out of here and let the NBA deal with him.

These are not the solutions we are concerned with here.

Instead, we propose a solution beneficial to both players and the competitive level of the college game, not to mention the entertainment value of NCAA basketball: let NBA players who have remaining college eligibility go back to school at the end of their careers.

If a player likely to be drafted stays in school regardless of that knowledge, they're making a move that's at best a calculated gamble and at worst foolish. Why risk injury and play for free when a professional payday awaits? Once a player has reached his professional peak (and hopefully, financial stability), however, he might feel a twinge of regret that he didn't get to finish a run in college. Many go back and complete their degrees later, but why shouldn't they have the chance to complete their college basketball career, too? They might not have the legs for NBA stardom anymore, but they very well might have the gas to still compete in college ball.

"But Scott," you might ask, "what does any of this have to do with college football?"

It's March. Give me a break. There's a finite number of wacky Harbaugh antics to go around and we have to ration them. [Editor's note: This is not true. Jim Harbaugh is the renewable energy of antics.]

You might note that the NCAA's amateurism rules would prevent professional athletes from returning to play amateur sports, and you'd be right. I'd note that, if presented a way to get players on the floor who are more talented than your average college player - players who'd otherwise be retired or playing in the Chinese league - they could find a loophole to make it work. Make them adjunct professors. Teach a class about how to manage your professional career and "what should and should not go in a DM." TV dollars can make anything work.

Because the NCAA needs someone who looks as old as Matt Stainbrook.

The world needs more of Uncle Ricky, and he's ready to play.

You just have to feel like it'd piss Jordan off.

One more year to cement his legacy as the Greatest Tar Heel of All Time! (covers ears and sings)

That'd be fun yeah but what if 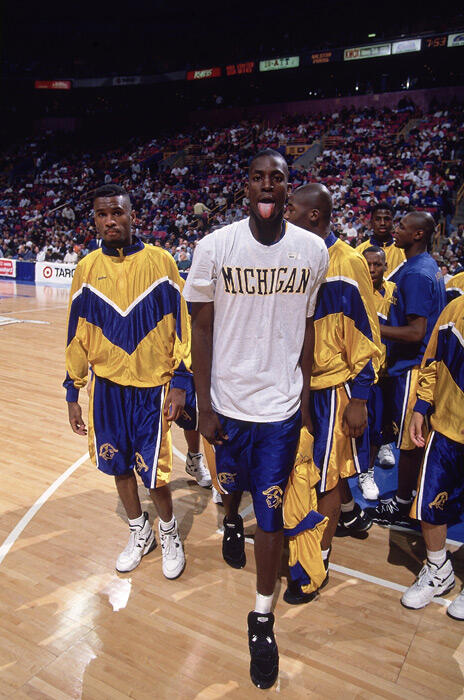 I just love the idea of Kevin Garnett screaming at a bunch of 18-year-olds so very much.

"But he doesn't have any eligibility le-" SHUT UP "he already finished his degree, and" NO NO NO SHUT UP NO. THIS IS MY FANTASY WORLD AND WE'RE PLAYING BY MY RULES AND WE GET ONE MORE SHOT AT THIS. THIS PRESS CONFERENCE IS OVER.

Because someone's got to get them past the second round again eventually, right?

I refer you to item 6a above. No one's going back to Georgia Tech. Starbury the Brooklyn Blackbird would be tremendous television.

We're assuming, given Kobe's straight-to-the-pros career path, that he'd go to his father's alma mater. Besides, at a smaller school he could take on the role of coach, athletic director, dean of students and probably mayor. Professor Kobe's class is in session. Don't be late.

Oh, and send Manziel back to A&M.  They'll know what do with him.