A PINKEL IN TIME

THIS HAS NOTHING TO DO WITH MIZZOU THAT'S JUST THE BEST PUN I COULD COME UP WITH, LAY OFF IT'S BEEN A WEIRD WEEK

Share All sharing options for: A PINKEL IN TIME

[scene: it's just before noon on a college football Saturday]

ME, AT NOON: Ah, okay, time to settle in for a nice pleasant Saturday of college football watching. Let's see, the noon slate is okay, I suppose. We've got Iowa-Northwestern, that'll be important for the Big Ten West race. Florida State-Louisville could be interesting, and so could Ole Miss playing at Memphis. But, you know, the bigger games don't come in until later, maybe I could get so-

[a flash of light, sparks and smoke, as a disheveled, wide-eyed and delirious version of myself bursts into sight]

ME AT MIDNIGHT: IS IT NOON? AM I TOO LATE?

MIDNIGHT: IT'S YOUR GAMES, NOONMAN. WE'VE GOT TO DO SOMETHING ABOUT YOUR GAMES.

NOON: Are... [squinting] wait, are you me from the future?

MIDNIGHT: TWELVE HOURS AND FORTY-NINE GAMES IN THE FUTURE, TO BE PRECISE

NOON: Why are you wearing a metallic jumpsuit and six bowties, there's no way fashion has changed that much in the course of-

MIDNIGHT: A LOT HAPPENED DURING THE 7PM GAMES, OKAY

MIDNIGHT: LEONARD FOURNETTE RAN INTO FLORIDA'S DEFENSE AND IT TORE A HOLE IN THE UNIVERSE. WE HAVE TIME TRAVEL NOW.

Bet that defender wishes Dr. Sam Beckett would put this one right

MIDNIGHT: A LOT OF PEOPLE DIED FROM IT TOO BUT THAT'S NOT REALLY UNUSUAL FOR A NIGHT GAME IN BATON ROUGE

NOON: Sure. Hey, can you stop shouting? The baby's asleep. Also, this looks too much like my Bo Pelini schtick.

MIDNIGHT: The baby's in college. You left Virginia Tech-Miami on in front of him this afternoon and it aged him 20 years.

NOON: Did he at least go to Cincinnati like I di-

NOON: OH WHAT THE HELL

MIDNIGHT: After the devastation of the Fournette Horizon he figured it'd be safer to go to a school without football. 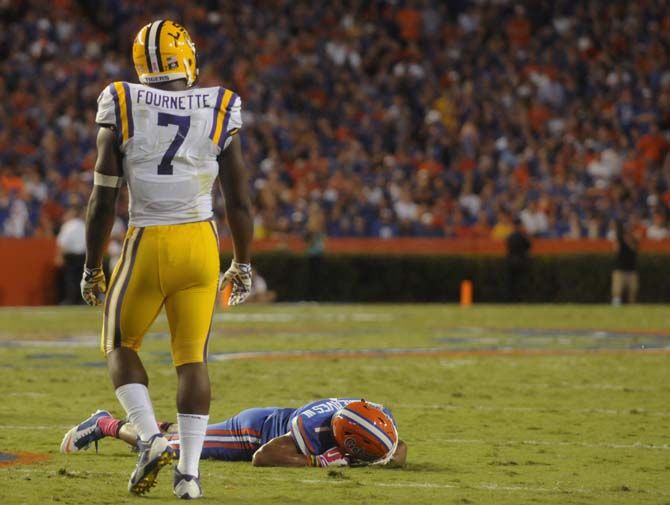 NOON: So let's get to the point, why are you here? If you suddenly got time travel, why didn't you go back and try to change the result of the 2009 Big XII title game, or kill Hitler? Or wake Seth MacFarlane for his flight?

MIDNIGHT: Look, man, we all got time travel tonight. Lots of people are working on things. You're a part-time niche sports blogger, you're not gonna be assigned the Hitler Account.

MIDNIGHT: No, I wanted to talk to you about your viewing choices. I'm sure you think you've got a nice little plan for the day right now, don't you?

NOON: Actually, yeah, I was thinking I'd half-watch some of the noon games, see what's interesting, maybe tidy up around the house a bit, y'know, get my life in order. Then 3:30pm looks great, there's Alabama-Texas A&M and Michigan-Michigan State. Probably have a little window after those where I could go out for a jog, and then it's Florida-LSU and Ohio State-Penn Sta-

MIDNIGHT: Let me tell you how the day's actually going to go, smart guy. You're going to end up watching two hours of Iowa bludgeon Second-Half-of-The-Season-Northwestern on their way to a four-point win that won't ever feel close. You're going to get bored and flip around for a while and then for some reason settle on Georgia Tech-Pitt. You're going to go downstairs and make a giant sandwich and pretend that's your "housework" because you put the knife you used into an already-clean dishwasher and ran it against instead of unloading it. Then you're going to try to watch the Alabama game. You think it's going to be a good one, because you've learned nothing over the years about what happens when we start counting the Tide out or start counting the Aggies in.

NOON: Okay so I shouldn't-

MIDNIGHT: THEN you're going to flip over to Michigan-Michigan State! Maybe that'll be a good one, says the guy who watched them both play last week! Michigan wins 27-0 and the world becomes a measurably more insufferable place. It's a real problem. First priority on the time travel list was sending someone back to patch things up between Harbaugh and Jed York.

MIDNIGHT: Ohio State ends up looking like Georgia in their new uniforms and playing like them too, but they still pull out a win because c'mon, man, Penn State. Then there's the whole LSU tearing a hole in the space-time continuum thing, I told you about that. Fournette ended up in ancient Greece. Ran for 400 yards against Troy.

MIDNIGHT: You order a giant pizza, never make it out for a jog and you fall asleep watching San Diego State-San Jose State in a pile of your own garbage.

NOON: I mean, overall that sounds like a pretty decent day, even if the games don't go as planned? They don't always have to be close to be fun, and there's always flipping around to unexpectedly exciting undercard matchups, y'know? Twitter adds a fun layer to everything, too. I think I'm gonna enjoy today regardless.

MIDNIGHT: Yeah, no... the games are actually fine, I really just wanted to warn you about that sandwich. That mayo was still in there from when the power went out last month. I feel like hell.

MIDNIGHT: Can I use your bathroom?