The Factor Five Five Factor Preview is back for 2014 with the first edition.

NEBULOUS STATISTICAL COMPARISONS OF DUBIOUS VALIDITY We have played one game and your statistics are garbage and so is Houston's offense. The Cougars turned the ball over six times, so if 27-7 makes you want to leap with both feet into the Roadrunners' bandwagon, well, go ahead. We're not big on logic around here, and that's how you end up with an ass tat of Larry Coker's face that stings ever so slightly every time it rains. It looks scary now, sure, but when the scabbing clears up it'll...shit, it'll still look like Larry Coker. Riding a woodpecker nude. Tattoos are AMAZING.

UTSA held the ball for 40 minutes in the Houston game. That plan will not change against Arizona, because the Wildcats put up 787 yards of offense last week against UNLV, ran 94 plays, scored 58 points, and had double 100 yard rushers and receivers on the night. Believe you are the darkly painted speed hump at the end of a long residential street, UTSA: believe it with all your heart, because that's about the only hope you have.

This is Rowdy, UTSA’s roadrunner mascot: 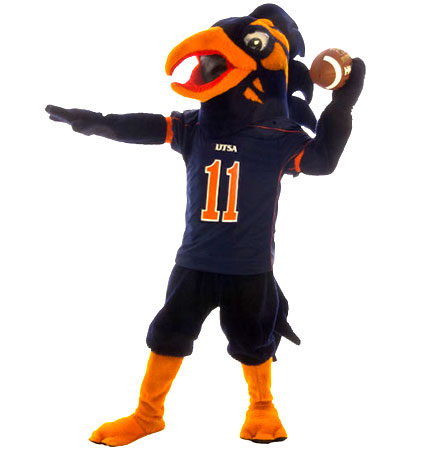 And this is a wildcat in a swimsuit: 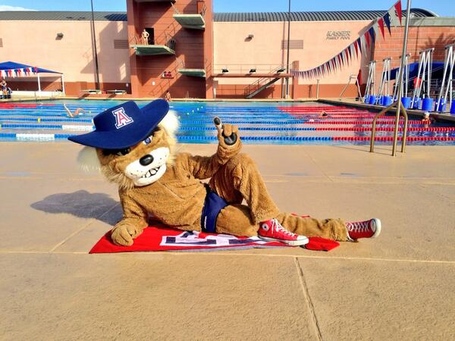 ADVANTAGE: Arizona. We reward self-confidence around here, even when it is creepy and weird

The Alamo Dome has only been home to one other football team: the San Antonio Texans, a CFL franchise that went 12-6 in their one year of operation in 1995. They then disappeared from the earth after that one year. Don't let the legacy of the San Antonio Texans go unsaluted, Roadrunners, and say a prayer for the Shreveport Pirates while you're at it. They came before you, albeit with the pesky burden of actually having to pay their players real money.

ADVANTAGE: Arizona, unless someone cuts a hole in the roof and conjures up a few stout lightning delays. (AKA "The Muschamp Prevent Defense.")

Downton Abbey is a wonderful television show, and not just in some dumbass "oh my wife wants to watch it and it’s fine I guess" way. The production values are gorgeous, Maggie Smith tossing verbal daggers without a care in the world never gets old, and the show does a good job of quietly contrasting the mostly dumb problems the rich folks with the actual shit the house staff has to deal with. "Oh, that’s a real bummer that you have too many wealthy suitors to deal with. Will you excuse me for a moment? Everyone I know is dying of an untreated respiratory infection."

And because the world of Downton Abbey is so potentially sprawling, new characters are introduced without it feeling shoehorned or forced. You can bring in some visiting dignitary from Hejaz or a poetess from France and it’s totally fine! So we’re judging the names this week on what sort of Downton Abbey character they’d fit with.

Luca Bruno - An unsavory anarchist from Naples with no feet.

Hank Hobson - The American chemist hired by the Dowager Countess to increase the potency of her home-grown poppies.

Dalton Sturm - A sea captain who turns up at Downton with a crate full of unsigned notes written to Edith. They are later accidentally traded for cabbage.

Chase Dahlquist - Village dentist who talks too much.

ADVANTAGE: UTSA, but only after Dalton Sturm punches Thomas in the stomach.

Rodriguez is winless against Coker dating back to their days at West Virginia and Miami, respectively, but grown men who rise to power at major football programs don't carry over petty grudges ahahahahah nope-- Rich Rod will bury him if he can, because this is what coaches do. They don't forget things, ever.

EDIT: Arizona did beat UTSA last year, so RichRod has a win here. He's still gonna thump if he can thump. Thanks, Justin J.

UTSA has the edge in sheer cussedness, though, being both the underdog here and carrying the imprint of their coach, who finally found a place where he resembles the local wildlife. Look at him, noble Larry Coker: the desert tortoise, poised in the morning sun, refusing to yield to the elements, moving slowly and methodically down the field with a roadrunner's wings painted on his indomitable shell. If UTSA wins, someone will paint this very image on the back of a truck in San Antonio, and on the sides spraypaint "PINCHE CORRECAMINOS" on the sides.

We kind of want to root for UTSA here just to see that truck. Eh, fuck it.

ADVANTAGE: UTSA. ¡VIVA LOS CORRECAMINOS! (And Arizona wins the Factor Five Preview 3-2 anyway, so might as well give plucky UTSA a bonus point for being cool and fearless here.)