Share All sharing options for: THE FIRST SAD FIELD GOAL OF 2014

A quick review of the Sad Field Goal definition explains why Week 1 is not often a good candidate for one to appear:

42 games last week featured an FBS team playing an FCS opponent, who are automatically ineligible to kick a sad field goal under part a. They are also less likely to totally throttle an opponent, making the chances of parts b and c occurring slimmer overall. Five of the FBS vs. FBS games featured teams from the same conference, and only a handful of the others featured what appeared to be potentially large mismatches. But the Sad Field Goal doesn't care about probability, and, last Friday, we got our first of the year in the UConn-BYU game.

Here was the situation: down 28-7, the Huskies recovered a BYU fumble near midfield just before the end of the third quarter. Nine plays later, the drive stalled out with a 4th and 12 at the BYU 18 yard line. With 11:48 left in the game, a field goal would turn a three possession game...into, yeah, still a three possession game.

But you did it anyways, Bob Diaco. You sent your kicker out there and told him to go get those three meaningless points, and he came through. So congratulations, Connecticut. Accept this custom logo, suitable for promotional materials or uniform patches, as your reward. 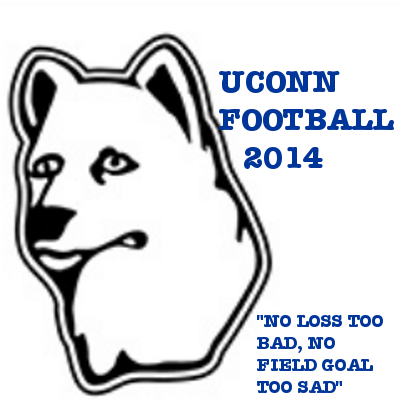