POWER RANKINGS WITH TREMENDOUS HEINOUS AND ILLEGAL AMOUNTS OF POWER

BACK WITH OH SO MUCH HOLY POWER

Share All sharing options for: POWER RANKINGS WITH TREMENDOUS HEINOUS AND ILLEGAL AMOUNTS OF POWER

No they don't make much sense. But they're ours, just like this baby made of ham we call Skillet Orville Hall, and that's what counts. Isn't that right, Skillet?

1. BAYLOR. Power rankings don't have to make sense from just a football perspective and nothing throws off our perspective in the positive direction more than FIRE SWEET BLAZING PYROMANIAC FIRE. A proper hellfire and brimstone entrance has been lacking from Baptist football. It also helps that they held SMU to under 100 yards of offense, and that their quarterback played a whole half of football with two broken bones in his back, which is also metal as hell itself. We broke the same ones-- the little bastard transverse processes along the spine-- and needed Dilaudid to be able to walk. It may be possible that Bryce Petty is tougher than we are!

But how can you not put FSU or Texas A&M here Well buddy it's pretty simple. We like Baylor, and FSU can go fly into a ogre's butthole, and A&M is next and didn't have fire. You use fire, you win the week. There's math to back this up, but we refuse to show our work because cool kids never, ever show their work, and instead walk away from completed math problems like they're exploding cars. That's the answer, Mrs. Myers. You take it, or go bitch about your divorce again in the teacher's lounge some more.* 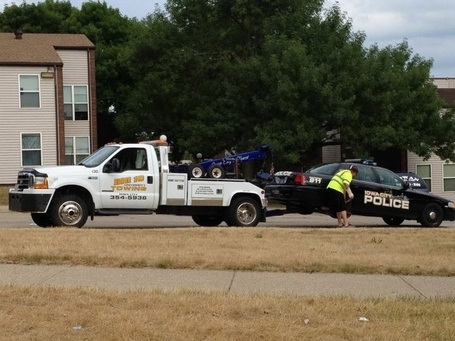 2. Best Little Whorehouse in Texas. We lied. BLWIT is ranked ahead of Texas A&M, but that's not the Aggies' fault. Aggies ain't got tapdancing Charles Durning. No one does.

The Chicken Ranch was a real place that a journalist got closed after an investigation. Marvin Zindler said he did it not because he disapproved of prostitution, but because of the brothel's ties to organized crime. Why this doesn't apply towards easily half of the businesses in Texas is a good question, but you can't ask Zindler. He died a few days after filing his last on-air report yelling about slime in restaurant ice machines and rat-infested Chinese buffets in Houston from his deathbed. Marvin Zindler, even if he did close down a whorehouse, was unquestionably down for the cause.

Like the idea of "Kenny Trill" but I think @coachsumlin would agree one good game alone doesn't make you trill. He's on his way though!

Trill is a certification process run by Bun B. It's no different than that of a prized French cheesemaker or artisan stonemason, really. There's levels and tests, and they have to be passed. And be honest with yourself: passing any test given in South Carolina outside a doctor's office doesn't prove much in any context.

4. Fowler in the booth. The most impressive part about Fowler's move to the booth: we scarcely noticed it. He just floated in pleasantly, nailed the play-by-play for OK State/FSU, and then coasted out the door like he'd been doing it for years. He probably flew two thousand miles in one direction just hours after the game to call a tennis match, too.

5. USC's offense. Weird that Lane Kiffin couldn't score in LA while Sark can, but that's how it works. Some towns just let you in, and some shut you out, and some let you run through Fresno State like a pinkeye outbreak. We suspect the single biggest difference in performance from week one to week two will be USC, but when you play Stanford you play a glacier in pads. Stanford quarterbacks will begrudgingly wrap up their burrito in silver foil, place it in their handwarming sleeve, and snap the ball with two second on the playclock. How long can they do this? Well, buddy, it depends on how long it takes the quarterback to eat this damn burrito. It's pretty big, and Kevin Hogan's a slow eater for a man his size.

6. Michigan. They scored fifty, and ran an offense that didn't rollout the quarterback on play-action every other play without the legitimate threat of a run game. Pat Dye once called Al Borges "one of the best offensive coordinators I've ever seen." Pat Dye's idea of a shootout are two camels fresh off the trail engaging in a pissing contest.

7. Kendrick and Jeezy. On the same track, no less. The only flaw in Jeezy's entire career is that he doesn't really rap a lot about smoking weed really hard, which produces rap's funniest songs because nothing is funnier than someone screaming and yelling vehemently about something producing a general sense of torpor accompanied by a need to giggle at cartoons. (Mystikal remains the king of the "I AM SMOKING SO HARD I TORE A HOLE IN THE FABRIC OF THE UNIVERSE genre.) Jeezy is, in all likelihood, too busy getting money, and then getting more money, to do that.

8. TODD GURLEY. "How's he such a manly runner when his name is Gurley? Did you hear me say that? I said 'Gurley,' which reminds you of the word 'girly.' It's a play on the inherent weakness of femininity in contrast to his outsized masculinity. I'm not a sexist, cause I watch the NFL games where they wear that pink shit. You need me, I'll be making this same comment tomorrow on 790 just like I did on the Dawgvent yesterday. I'm alone, y'all. I'll be so alone for the rest of my life."

9. Al Golden's shirt. Still holding out against the forces of rot and mold despite being worn against the hide of the world's wettest creature for hours every Saturday. Try to catch him to fire him, Miami, and he'll only slip from your hands like a greased sea cucumber. It's his only defense; that much should be evident after watching the Hurricanes get run over in the second half by Louisville.

[no others found or needed]

1. Wife because we are not stupid

3. That other lady at the DMV