Football's not a hard sport. As an example, let's look at Oklahoma State, currently the #15 team in F+, and currently sitting at 2-1 after almost beating the Florida State Seminoles in the season opener in Dallas. (My, didn't they look well-coached, and not at all tragicomic in everything they did!) They ran for a solid 161 yards in that game, and stayed committed to it throughout the entire game to the tune of a 42/28 rush-pass ratio. (And looked so composed in doing so, like they had practiced during the week, and enjoyed playing offense!)

Texas Tech gave up over 400 yards on the ground to Arkansas in a loss. (Like Mike Gundy's disciplined, likable teams NEVER would.) In fact, they're giving up 5.1 yards a rush, and just lost their defensive coordinator, and barring the last-minute announcement of Greg Robinson as an inexplicably good interim DC will continue a downward slide into total chaos. (Not at all like Oklahoma State's steady performance under Mike Gundy despite working off the main road of college football in sleepy Stillwater!) Oklahoma State's gonna run the ball and dare Texas Tech to stop it, and that's basically the entire game for Texas Tech right there. See? Football's so damn easy sometimes.

(We might be considering Mike Gundy as a head coach! This is all transparent ogling in light of our own football team's implosion! Never mind us admiring that man, who is 47!)

The Texas Tech mascot is officially The Masked Rider, and not the Raider Red. That's a shame because we could have had a matchup between one gun-toting psychopath.. 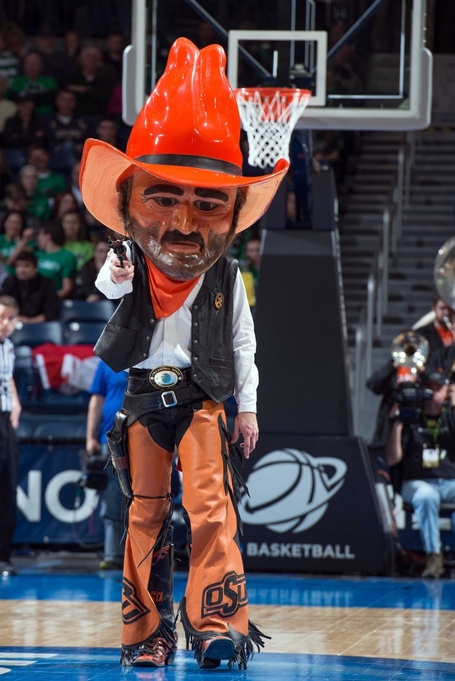 I can and will wave this around in a daycare, it's the law here, don't act weird about it commie

Instead, we have a blowout between the Masked Rider, a Zorro-type figure who enters the game at full gallop on a horse as black as the bubonic plague. Sure, every now and then one of them runs into a wall (or doesn't), but that's how Texas rolls as a state in general. There will be casualties, and people will write stories about them. We'd rather those come as a result of literal horseplay than two dudes with abnormally large heads firing pistols at each other across a field with 22 players on it. (And if you don't think those two mascots have loaded pistols, you have never, ever been to either state.) 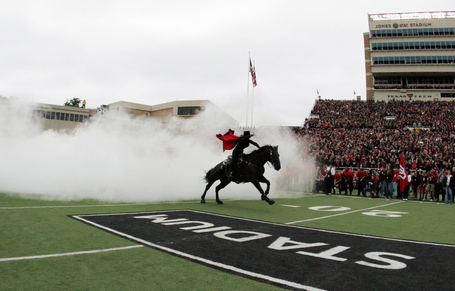 Oh, just ask Baylor if T. Boone's Frackbowl is underrated as a venue. It's loud, traps noise in really well, and is full of little, menacing touches like the night-black cattle gate the Cowboys bustle behind before they take the field. (Really, it's way more menacing than it sounds. They look like a bunch of Bane's henchmen bounding around back there before it opens.) All of that seems to work perfectly well on Texas Tech: they haven't won in Stillwater since 2001.

Man, this is a tough set. What I really want to do is mix these names with one another so we can have Poet Castleman and Daxx Outlaw and Le'Raven Lundblade. But that isn't how this Factor works, so the balance is tipped by Jimmy Bean. That's a name that must have been difficult to go through childhood with, and it's about damn time that the Jimmy Beans of the world started getting extra credit instead of extra shame.

Not really any, in any serious direction? Unlike "Texas Tech versus [every Texas school]", there's no history of personal animus here, no historical vandalisms, and no real on-field tussles not involving a fight over an interception. (Which, yeah: there will be more than a few of those tonight, as there usually are between two hyper-aggro offenses.) Texas Tech lost last year, so a marginal revenge call for the Red Raiders here.

FINAL TALLY: Oklahoma State triumphs in the final Factoring 3-2. Remember, there is no Factor for handsomeness, because Kliff Kingsbury and those like him already succeed enough thanks to their tremendously good looks in the real world. They don't get an extra bump here, dammit.