Can you quantify how annoying a team is to play? Probably, and a good place to start for that offensively would be looking at the split between run and pass, and how balanced you are because nothing is more annoying than an offense capable of doing both with equal proficiency.

Through just two games Kansas State is already on schedule to be the most obnoxious team to defend in college football, balancing out at 472 yards rushing to 477 yards passing on the year. This year they're sitting at a 56.0% run rate on standard downs (75th nationally) and 36.7% on passing downs (43rd in the nation.) From a defensive coordinator's viewpoint, you know you're going to see a faceful of the run, and by the time you see the play-action pass it's usually over your head, and Bill Snyder's poker face is amazing even by crafty old man standards.

Oh, they run the shit out of the pop-pass, too, Auburn. Tonight's broadcast will be sponsored by the bottled tears of linebackers with whiplash from looking at the wrong place, all the time, for four quarters.

It is easy to mock Auburn for having two mascots, Aubie 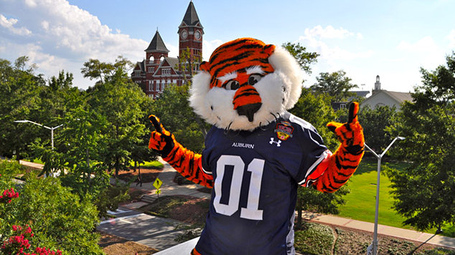 and the War Eagle 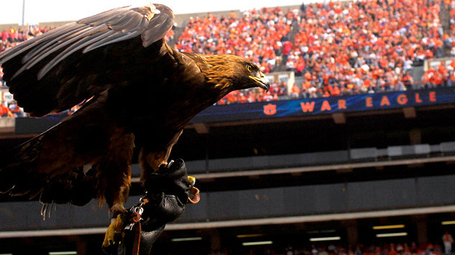 but you have to understand that, in Alabama, there is no such thing as having too much of something, because everyone in the state is just a tweaked-back-from-lifting-lumber-into-the-truck-bed away from a lifelong painkiller addiction that wipes out your bank accounts and forces you to join a shantytown gang. You don't feel bad about mascot gluttony, because you know the truth: tomorrow, we're going to Home Depot to get some gazebo materials.

Kansas State also has two mascots. Or HAD.

Bill Snyder Family Stadium has a surprisingly vicious reputation in the Big 12 for a place that sounds like it was named after some 1950s era Grand Ole Opry members. ("The Bill Snyder Family, here to sing "Aint' That A Whisper From the Mountain, featuring June Carter on fiddle and some extra washboard work from special guest Timbers Flatrack. Remember this broadcast is sponsored by Martha White. Get your biscuits right with flour from Martha White! Take it away, Papa Bill!")

If you're curious about whether it's on Yelp, the answer is yes:

The worst part about this stadium was the bathroom situation. I have never seen such lines, especially on the west side of the stadium. The men's lines were incredible and the stench of urine was gross. Ugh.

Just pay Yelp 50 bucks or so, and that comment will magically disappear, K-State!  The stadium itself is very loud for a 50K seat place, and yet not a single Kansas State fan was arrested last year. This either means they are very well-behaved, or laws are suspended and only atavistic primal rage rules in Manhattan as long as there is time on the clock. (Kansas didn't have a single fan arrested last year, either, but that happened for entirely different reasons.)

That just leaves us with Jordan Kupersmith vs. Tucker Tuberville. I think we always knew any success Auburn's enjoyed in the last few years was thanks to Tommy, and that's just as true in the Factor Five. WAR TUCKER.

Kansas State is 0-3 historically against Auburn, so there might be some tiny bit of motivation there. What might be more powerful: Bill Snyder's lingering rage at the greycoats who killed his mate Johnny Hoppensworth at the battle of Shiloh, where Bill lost the last ounce of love in his heart for like, a good century or so. Hurt to watch a man die like that, even after seven hundred years of hard living on this planet. Bill Snyder is the Nicest Highlander, but he'll still cut a man's head off if it's part of the job.

THE FIVE FACTOR SAYS: Kansas State wins this, though it's a narrow 3-2 victory. Which probably means Auburn will blow the Wildcats out of the water, because the Factor Five Five Factor Preview is very wrong and stupid. #RonPrince4FFFFP