NO HASTE BEFORE YOU PASTE, LAFAYETTE 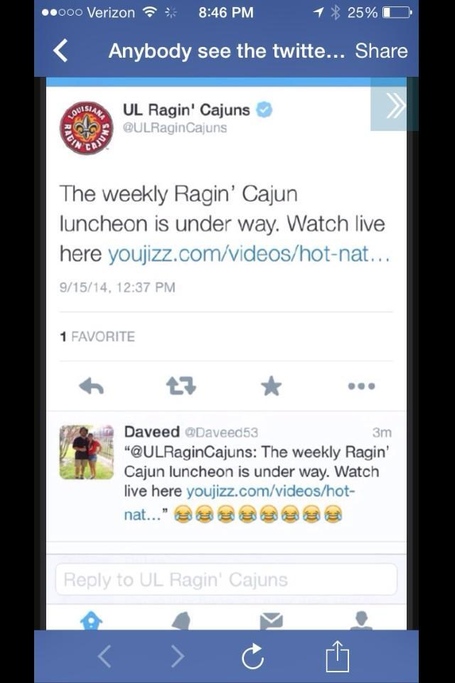 That's a real and now-deleted tweet, confirmed by Luke Zimmermann and first seen on R/CFB. Always test out that paste button before you link, particularly if you're into looking at pictures of Lou Holtz in drag. Which this definitely is not.

LET'S JUST TALK ABOUT ANYTHING ELSE AT ALL IN THE UNIVERSE PLEASE. Jason wrote a reasonable thing about Jameis Winston, and so did Bud over at Tomahawk Nation, and let's now never talk about Jameis Winston again because he's crossed the Tebow Threshold, and is now only the serious concern of total fucking idiots.

THIS WEEK IN SCHADENFREUDE. It's good as usual, particularly when it gets to the part where a wood chipper is invoked as a valuable weight loss tool. WILL MUSCHAMP'S GONNA PULL THIS ONE OUT Y'ALL.

MANHATTAN MEETS AUBURN. There are ways Auburn can lose at Kansas State, and those ways all got a little more probable now that Auburn's starting safety Jermaine Whitehead won't be making the trip after getting into it with a coach. No matter the result, pretty much everyone agrees that Auburn will score like crazy (as usual,) and that Tyler Lockett will still have an insane night because he is very good at football.

TIM MURPHY DOESN'T HAVE A BAD IDEA HERE. After heart surgery, the Harvard coach will be stepping back at bit to work as a CEO, and almost have something like a life.

ETC: Please say Brady Hoke is going to meet Pussy Riot, and that they will dine together on Tri-Tip while discussing art as a public struggle against private tyranny. It's Dom Perignon, it's supposed to bubble. (Just be like that sometimes.)