Should you be getting excited over a new bowl sponsor?

No. A rational person does not get excited over corporations, faceless negligent citizens created for the explicit purpose of negating the concept of personal liability. Murder by a thousand hands does not deserve your friendship, loyalty, or love, no matter how beautiful a mask it wears.

Are you excited about a new bowl sponsor?

YOU'RE DAMN RIGHT WE ARE. Because it is Popeye's, the last known fast food fetish that the nutritional stresses of adulthood have not burned clean from our system. Taco Bell may be ground parakeet meat stuffed into amalgamated corn chips swept from the floor of our nation's Chili's. McDonald's serves only the cheapest cuts of soy zombie meat sandwiched between sugared packing materials, and Subway provides an unblocked and unceasing pipeline for the lunchmeat of expired racehorses to flow into the gullets of the American workforce.

It's all bad and we know it but dammit Popeye's, we cannot quit you or your spicy, chunk-breaded wonderment. All other fast-food restaurants may be unmasked as accomplices in food recycling, but you will be there for us at the last, Popeyes, even when we find out you've been making us crave Mexican pigeon meat masquerading as chicken. Honestly, don't act like you'd know or care about the difference. You wouldn't, particularly if it were spicy.

Isn't that an inconsistent position?

Yes, well, thankfully that's never going to be something you get here.

Does it help that it's the Bahamas Bowl?

Hell yes it does. In a sport loaded with corruption where the rules make proper compensation a form of contraband, there is no better or more fitting location than the Bahamas. The only thing more appropriate would be playing the game on Norman's Cay.

Wait: is there even a Popeyes in the Bahamas?

There are dozens of Popeye's in Turkey, and eight in Ho Chi Minh City in Vietnam. Japan boasts ten locations, while Peru has at least twelve different spots where you can eat a three piece with red beans and rice within spitting distance of the Andes. Italy has two stores; Saudi Arabia has eleven locations. Even the backwater nation of Florida has so many locations that a visualization of their layout looks like a herpes outbreak. (Which, yeah: that's appropriate on a lot of levels.) 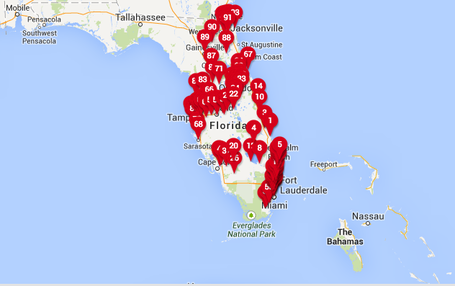 Note what does not have a single red dot: The Bahamas.

So you're going, right?

Oh hell no. It's on December 24th, and there's a little known rule that you lose your citizenship if you spend Christmas out of the country more than once. Additionally: parole violations are serious in the state of Georgia and are treated harshly by the authorities.

Which teams would be the most entertaining to turn loose in the Bahamas on holiday?

Given the MAC/Conference-USA matchups? Ohio vs. Rice. Frank Solich steals a boat, and is last seen yelling "WHO'S THE REAL PIRATE" with the hammer down headed somewhere towards Cuba while singing "Changes in Latitudes" through clenched teeth.

CORRECTION: we'll take Rice/Ohio, since we screwed up the conference affiliations first time around. OWLS ON PARADE.

Would the Ohio mascot be with him?

Of course. He's not missing a pillage. 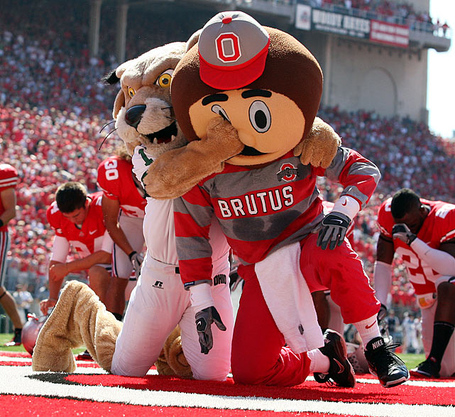