UAB HAS DRAGONS ON THEIR HELMETS

THAT'S ABOUT ALL THEY HAVE, BUT THEY DEFINITELY HAVE DRAGONS

Share All sharing options for: UAB HAS DRAGONS ON THEIR HELMETS

There's a graph somewhere in the world that shows the intersection between football teams of bad quality and helmets of high quality. Other teams may be close-- The Kansas Jayhawks Blood-Raven unis are riiiiiight there-- but there, at the nexus of football misery and sartorial wonder, sit UAB's new helmets. Behold their majesty; respect the fire they vomit on the opposition; nod in appreciation at the fine dragon's scales in the background. 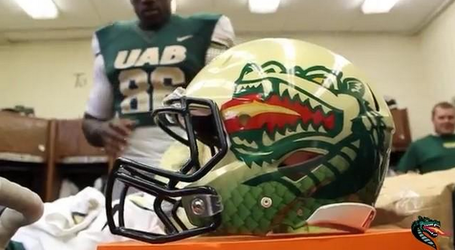 The helmets may be the best reason to watch UAB football this year. You might remember them losing their head coach, Garrick McGee, to Louisville. Normally this kind of move would involve becoming a head coach, but nothing about UAB as a football entity is normal. McGee left to take a nominal step down and take the position that got him the UAB job in the first place: being Bobby Petrino's offensive coordinator. He will then leave Louisville for UAB in a year, and leave room for Paul Petrino to return after he is fired from the Idaho job. (Petrino coordinators should be loaned like developing soccer players and not hired, basically.)

In conclusion. UAB's new helmets are fantastic, one time recent national title holder Jimbo Fisher almost took the job, and none of this is too tragic because Houston Nutt's going to get this program back on track in 2016 whether they offer him the job or not.

P.S. Do you know who their current head coach is without looking? You don't. Shut up. It's Bill Clark, a high school football demigod in the state who may actually be pretty good at things like football, provided the University System of Alabama's Trustees don't keep him in their back pocket just in case Alabama needs him as their 87th "quality control" coach.