FUCK IT, THE BIG TEN SHOULD GO INTERNATIONAL

Share All sharing options for: FUCK IT, THE BIG TEN SHOULD GO INTERNATIONAL 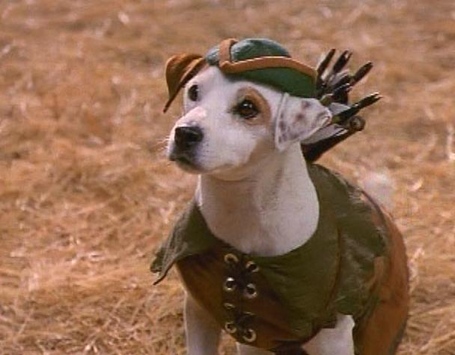 I cannot possibly need to sell you on this show any further. It is about a dog who daydreams in classical fiction. That is the greatest television concept of all time, except for "Dog with a Blog," but fuck blogs, Wishbone was like, "I will explain 'Cyrano de Begerac' to small children." It's spectacular, and I would totally watch a rebooted version because there's no way in hell I'm reading "Wuthering Heights" and would much prefer a dog explain it to me.

b.) I was in England last week to visit my girlfriend, who just finished up a master's at Oxford. Oxford is the closest thing to Hogwarts as you can get without JK Rowling being personally involved. You take your exams while wearing a cape. When you receive your degree, you are expected to bow. Every building is steeped in history and Tolkien's vomit, probably.  Every building also features very short entrances, making it clear that 5'8" me would have been treated as a fearsome giant. We also visited London, which is a great reminder that sometimes maybe too many people are in one place and maybe some of them should be moved elsewhere, especially if they are French tourists and they are smoking cigarettes and yelling at one another.

c.) Oxford should be admitted to the Big Ten as soon as is humanly possible.

Oxford University is an obvious choice for entry into the Big Ten. Like, painfully obvious. I'm amazed no one else has thought of this, but I'm also amazed that people routinely eat potato salad with mayonnaise, so I should just stop being surprised by anything.

The reasons for Oxford's entry into the Big Ten are iron-clad. Steel-clad. Pyrex-clad, and I once watched a Pyrex dish fall on a tile floor without breaking so I know that's the claddiest form of clad:

Distance between Rutgers and Nebraska: 1,479.2 miles

Distance between Rutgers and Oxford: 3,435 miles

See, not too terrible! Schedule Oxford before a bye, fly overnight on a Wednesday, play a night game on Saturday, and boom, Rutgers-Oxford at 3PM ET on BTN. 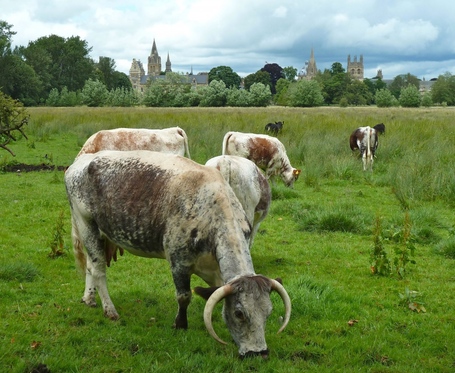 Those cows are Oxford cows, who graze in Christchurch Meadow while occasionally looking at passers-by with extreme disdain. Can't you see the team at BTN throwing it to Matt Devlin and Glen Mason with some b-roll of these cows before a few quick ads from a farm equipment company and Ro-tel? I sure can. Glen Mason would make some weird joke about cows and offensive linemen, Matt Devlin would laugh nervously, and we'd get right to the opening kickoff.

4.) Oxford is the most tradition-bound place on the face of the earth. Everything has been done the same way since 1450. It's perfect.

5.) Oxford already has a football team. Sure, their starting tight end is a very nice kid who is studying Latin and is about 135 pounds, but give Oxford like, five years of recruits and they'll be just fine.

6.) You could set an episode of "Wishbone" at a Big Ten school and it would make complete sense. Oxford inspired  "Alice's Adventures in Wonderland."  JR Tolkien wrote "The Hobbit" at Oxford. We could bring back "Wishbone" if Oxford joined the Big Ten, and then America's children would be saved and everyone would be able to understand literary references because a small dog explained them.

Oxford to the Big Ten. You're welcome, Midwest.