MARS IS JUST EARTH WITH AN EXTRA MOON

Steve Spurrier on Dabo Swinney’s "He’s from Pluto, I’m from Mars" quote: "Dabo still thinks there are 9 planets out there"

Oh, but Spurrier's right. Is he? There's plenty of people out there who think Pluto's a planet, and if Dabo's about anything, it's about believing in things. He believes that Pluto is a planet. He believes the ACC isn't a collection of planetoids, buddy. If it is, then one won the national title last year, and that's more than an SEC team can say, isn't it? He might want you to forget what happened when that particular planetoid did to his in a 51-14 collision between the two systems last October

Let's focus on the important things here, like Pluto, and the way the solar system really works. 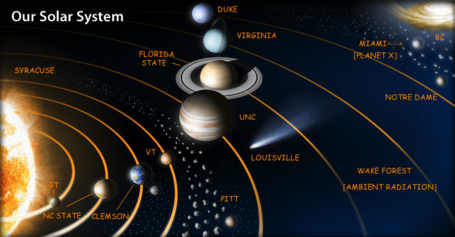 See, the Earth is Clemson because it's the prettiest, the nicest, and the one that sustains all known life in the universe. It's also where Dabo parked his car, and that's real important because walking's slow, and life moves fast. Always remember where you parked your car, buddy! It's on Earth, which is the big blue one with air and Shoney's on it.

Working from the inside out, you find Mercury, the Georgia Tech of the universe because it's lifeless and clinging to existence just to spite the sun. Paul Johnson thinks it's a little chilly, of course, but that's why he's wearing a cardigan and drinking hot black coffee from the Publix at Atlantic Station. You know that's free? Don't even make you buy a dang carton of milk to get as many cups as you like.

Next is Venus, a hot, overcast sauna of a planet filled with corrosive sulfuric acid. That sounds like a meal at Cook-Out, so we'll just call them NC State.

Mars is Virginia Tech, because dammit how is there not life here it's got all the components but all we find is patches of ice and Frank Beamer's nail clippings and an antifreeze jug stuffed with crushed beer cans and ones. Bud Foster, you left your wallet on Mars. Come get it in your truck when you got a minute or two.

That big mess of unattended rubble between Mars and Jupiter is Pitt. Somewhere drifting in that mess is also Syracuse, the secret Sputnik 2B, floating through space with the corpse of Greg Robinson inside it. We didn't even learn anything from your journey, Greg. Russia was just bored.

That big gassy indecisive one is UNC. Could be a star, could be a planet, and isn't exactly either. Saturn's FSU because they've got lots of rings, and also because of this:

The outer atmosphere is generally bland and lacking in contrast, although long-lived features can appear.

I'm seeing that as stripmalls and Bobby Bowden and the dick-capital, so yep. Saturn's FSU.

Virginia's Uranus because the less you talk about it, the better.  Also named after a dead god, which works.

Neptune's Duke because Neptune's the king of a place no one cares about, and is the Aquaman of the Greek gods. That's a basketball school in a nutshell if we've ever seen it. Enjoy making Dickie V carry that trident, Coach K. You're the king of the neighborhood pool! Have fun watching the Mason Plumlees of the universe dunk on middle schoolers, buddy.

[Dickie V, in background: "THAT IS ONE IMPRESSIVE AND GRITTY BALL OF AMMONIA, BABY!!!"]

Wake Forest is ambient radiation and a distant echo of the time Jim Grobe started the universe by running his truck into a tree one morning. Does this mean Jim Grobe is God? Yes, in the sense that he is not keen on you eating shellfish and loves frog plagues.

Miami is Planet X, because everyone who defends its existence has tried to detonate a smoke bomb during a session of the House of Representatives.

Notre Dame is the real Pluto. Not sure whether it's in or out. Just kind of sits there. Kings of the underworld/South Bend/same thing. Peaked in 1930.

Boston College is another galaxy. Mysterious, otherworldly, and distant, it emits strange radio signals like "what the Sawx need is another man like Pedrioaaahhhhhh." Science has never cracked the code behind these signals. They likely never will.

Louisville? They're that comet. Not sure who they're gonna hit, but when they do someone's gonna end up in a neck brace.

The moon's Danny Ford, I guess. He only comes out at night, orbits Clemson, and controls the tides.