THE MICHIGAN MAN MYTHOS IS SHATTERED

Share All sharing options for: THE MICHIGAN MAN MYTHOS IS SHATTERED

STEREOTYPE: Michigan fans are haughty and proud folks who believe their university and its football team to be better than everyone else's.

REALITY: This man is named Larry and has a fucking block M tattooed on his head.

STEREOTYPE: Michigan fans are not rowdy or loud, because they avoid any behavior that might be construed as trashy.

REALITY: He got that tattoo when he was 36 as part of a contest to win tickets to the '97 Michigan-Ohio State game. He lost.

I'm that devoted to U of M that I would do anything to win tickets to a U of M game, especially (playing) that team from the south that sucks canal water through their butt.

STEREOTYPE: Michigan fans would rather lose playing "the right way" than win while doing something gauche like recruit in the South or throw the ball. 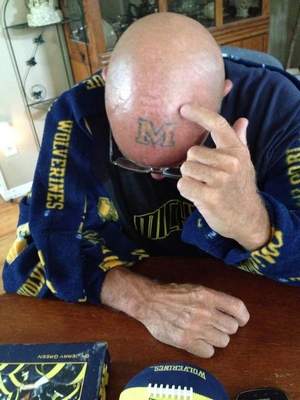