IT'S A TITLE YEAR, THERE ARE SIGNS

NOT EXACT SIGNS, BUT DEFINITELY SIGNS

Share All sharing options for: IT'S A TITLE YEAR, THERE ARE SIGNS

You might look at a two-headed alligator turning up in the Hillsborough River and think a lot of things: genetic accident, a terrifying instance of pollution-induced mutation in a species highly susceptible to toxins in the environment, a grim warning by Mother Nature to mankind about the dangers of messing too much with the natural order, or a Santeria-borne hellbeast conjured by mispronounced spells made by bored teenagers in Lutz.

We disagree. You're clearly not seeing the signs here. When are champions made? The summer. What animal are we talking about? An alligator. What else is an alligator? That's right, the University of Florida, represented by that sainted reptilian killing machine as a mascot for all sports teams, including its struggling football program. What's it got? Two heads. When was the last time the University of Florida had two heads? That's right, in 2006 with Chris Leak and Tim Tebow at quarterback.

What are we saying, you ask? 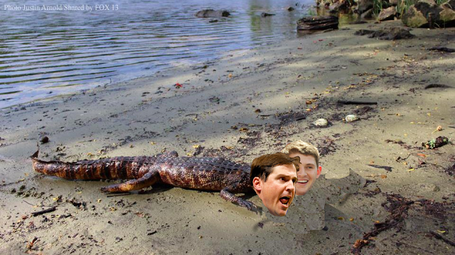 *Or that an enterprising Seminole will trap us, kill us, and turn us into a pair of boots at the end of the year while selling our heads on EBay. Shoney's doesn't ask for a lot of information from its suppliers. EITHER COULD HAPPEN, IS WHAT WE'RE SAYING.