A CONVERSATION BETWEEN RYAN AND SPENCER

RYAN: We like Mark Dantonio now, right? That feels like a weird thing to say, considering it wasn't that long ago he was just Frowny Faced Kirk Ferentz.

SPENCER: We do. But it's less weird after he had that super-snappy press conference after they struggled against the worst team in college football, Eastern Michigan. One of the reasons people don't really like Ferentz, for instance, is that he's never really had the wheels fall off in public, or had a heart attack, or had anything like a character arc. He just orbits 8-5 like a dull, lifeless asteroid.

R: Whereas Dantonio was born in El Paso, played at South Carolina, and coached at Purdue. He's seen some shit.

S: And had a heart attack the night after making the ballsiest call of his career, the Little Giants fake against Notre Dame. If we're talking about why you like something, they have to have a moment where you ride up or down with them on the narrative toboggan chute, and Dantonio as the coach of perennially schizoid Michigan State has been all over that map. (See: struggling against Eastern Michigan one year, and then winning the Rose Bowl the next.) So yes, we like him, certainly.

But what else is there to like besides Rich Homie Quan's oldest fan?

R: I think we like Connor Cook, because he is not Andrew Maxwell and because he has a name that sounds like a fanciful pirate.

S: We definitely like Connor Cook, particularly because at one point last year he learned to play quarterback. We also like him because he is not Jeff Smoker, a quarterback I hated for no clear or discernible reasons, and whose name was fun to say hatefully, as in "AHAHAHA Jeff Smoker just beat you on a last minute TD, you are so very bad at everything, Michigan."

R: We also like that Michigan State is going to Oregon, because no matter what happens we like being able to say something early in the season other than "well yes but who beat The Citadel more convincingly?"

S: I think we also like the kind of player Michigan State tends to recruit on defense, i.e. the Florida kind of defensive player. Someone who enjoys hurting someone at high speed, often with little regard as to whether said hurting was a.) legal b.) directed at the correct color jersey and c.) tats. Just lots and lots of tats.

S: I was just going to mention him! His very existence is an act of aggression against the aggrieved people of China.

R: That reminds me: we love Pat Narduzzi. He has lovingly built this murder factory and refuses to sell it to some fancy high bidder in exchange for a head coaching job. There's a real possibility he never leaves, even if we need him to be our lead space ambassador. "Yeah, I know those aliens might kill us all. But all I'm focused on is Wisconsin."

S: He's the liver of coaches, like Bud Foster. As an organ, he may not need the rest of the body to survive, and regenerates no matter how many pieces are cut off of him. He may be a shard of alien technology merely co-existing with the mediocre, fragile human lifeforms around him. He definitely is one of those defensive coordinators who believes that offense is perhaps unnecessary, and that his team can survive indefinitely while his defense beats the piss out of everyone around them.

We also need to talk about their colors, since very few teams in any sports succeed consistently while wearing green. This is especially true in college football, especially now that Notre Dame is basically football Ottoman Empire.

R: It's as if they said "what color would look good on a grey hoodie worn in crummy weather when all you had for breakfast was leftover Chinese food?" And that is the green they picked. It is perfect.

S: It matches the ethos, too. Their stadium looks like a foreclosure special: grim, usually sunless, and packed with cold people in layers sneaking sips off smuggled canned beers. My grandfather used to buy stuff at salvage and auctions and he would paint it that color: utility green. It's something I wish Michigan State fans wouldn't fight. It's grim, East Lansing is kind of grim, and they play nosecracking football with meanass dudes in tats who stop Stanford on 4th and 1 when they put eleven tight ends on the field at once.

That's a brand. You get your big-ass tub of salvage green, a linebacker named Taiwan, and a running back you're going to run 50 times a game until he or the opponent dies in the process. Why anyone doesn't think that and a mascot with a steroid problem isn't awesome, I'll never know, but I suspect it has something to do with the Big Ten's aspirations of being "civilized." What I'm saying is that you can blame Michigan for something else, Michigan State, and for keeping you from self-actualizing completely as a team, attitude and fanbase. That works out for everyone!

R: Here's a thing I don't like about Michigan State: they're going to lose some stupid game they shouldn't. And while I should be accustomed to that as a Florida fan, it will still suck. Because Michigan State will not get taken down by some Indiana team playing out of their minds and punching up in ways nobody saw coming. No, it'll be some trip over your own feet while carrying two cartons of eggs and dislocate your shoulder and now the paramedics want to know why you smell like eggs loss to Maryland or something.

S: AHEM. Like losing to Notre Dame last year. If they don't do that, they're in a run for the national title. Which they would have played against Florida State and OH HO HO HO HO HO HO Let's not imagine how that would have been after five minutes in the third quarter. You lose to Tommy Rees and you rightfully forfeit all claims to a national title appearance, though.

R: And you're permanently barred from Wu-Tang membership. Cam'ron is still salty about this, but he shouldn't have challenged Tommy to backgammon.

R: I'm going to say a phrase and I want you to tell me the first image that appears in your mind. Ready?

R: Yeah. Michigan State was only 48th last year in punts per game, but I worry that means Bollman's feeling the itch bad. He might tell punt returners to field the ball and then punt it right back on the same play.

S: "Gonna have to get the punt back in the playbook." I don't like that their fight song says "its specialty is winning," since I'm deeply concerned this might be an actual major. I also don't like that Dantonio, being a defensive coach, will just run back into the arms of Mistress Puntsworthy when things get scarce, offensively. Then again, he's prone to the occasional insane gamble AND he has Pat Narduzzi, so maybe he knows what Jim Bollman is after all. But that "winning as a specialty" thing is why a Michigan State doctor is going to get someone killed one day, because it's not even a social science, much less a specialized area of practice. 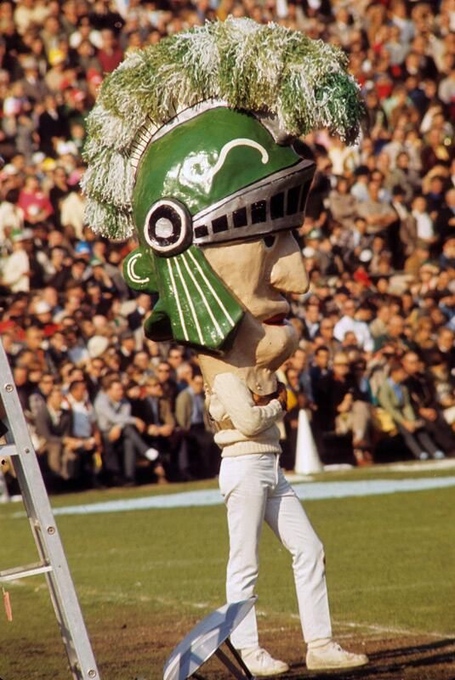 S: Could say the same about Michigan, amirite?

S: So it's safe to say that we generally like Michigan State?

R: We do, and we reserve the right to dislike them at a moment's notice. College football makes you a middle schooler in that way.

S: That moment will probably come right around that night game this year versus Maryland. That just feels like an undiagnosed abdominal bleed of a game.

R: God, why did you think eating fugu prepared by Randy Edsall was a good idea?

S: It's the Little Giants of sushi orders. Someone's gonna die. You just hope it's not you.