FREEDOM IS PARAMOUNT FOR STUDENT ATHLETES

Responding to today's news that the University of Southern California will now offer four-year scholarships in football, men's basketball, and women's basketball, the University of Alabama announced that they have also abandoned the traditional single-year renewable scholarship offer. "We've always considered ourselves to be on the forefront of student-athlete concerns," said Coach Nick Saban in a statement, "and today is no exception." 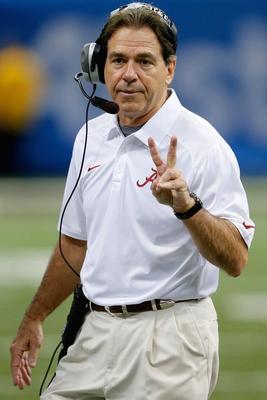 Saban, seen here ordering the exile of two food service workers who put grape tomatoes on his salad instead of cherry.

"That's why, going forward, we will be extending scholarship offers in four month increments. America is a land of freedom, and that freedom means not being tied down to an institution of higher learning if you don't want to be."

Some media members questioned the motives behind this new 16 week scholarship, suggesting that this might simply be another avenue for Saban to recruit beyond existing roster limits and then jettison players down the road. Saban, however, bristled at that suggestion.

"Frankly, that's a load of bull. What USC is doing is sad and desperate, like giving someone a promise ring on the fourth date. How in the world are these kids supposed to know if they want to be in the same place for four years? It's wrong to shackle them like that. I would rather these kids had an opportunity after four months to leave, if that's what's mutually beneficial."

The question was then raised if this would allow Alabama to make three times the normal number of scholarship offers, given that current limits only apply to one-year scholarships.

"We haven't settled on the answer to that. But I think there's a case to be made, yes. Math doesn't just disappear because the Big Ten's not happy about how it's working out for them." Saban then insisted he would only answer questions about zone coverage techniques.

It remains unclear whether schools will follow either USC or Alabama's model, stick to the existing single year renewable offer, or examine other options. Rumors have already circulated that Todd Graham is quietly offering four hour scholarships to recruits who are willing to drive him to the mall or do his laundry.

When reached for comment, Graham threw a lit bottle rocket and ran away.