This weekend, Urban Meyer was asked to identify the college football team he thought to be the greatest of all time. He picked 2008 Florida, a National Champion who beat four top 10 teams but lost to Houston Nutt at home. A talented squad, definitely, but it's a little self-serving and doesn't necessarily seem like the clear choice for this question.

For instance, what about a team that emerged from mediocrity to shock the world? A team that came out of nowhere to seize the number two ranking and then stepped on the throat of a juggernaut from Texas in the national championship game? They didn't have the best players, and they certainly didn't have the best staff. But we're talking about a team that, when the season was over, had survived one hell of a gauntlet, because the 90s were a time when schools didn't try to avoid tough opponents so they could rack up a good record without really playing anyone.

A vicious defense. A hardnosed offense. No way 2008 Florida could hang with the 1993 Screaming Eagles. 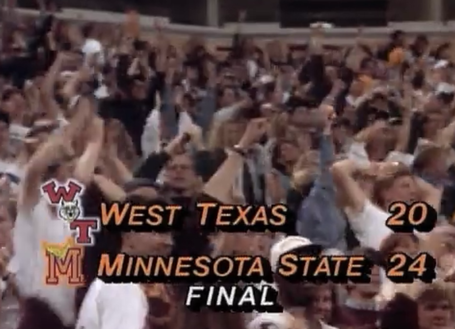