THIS AIN'T EVEN GONNA SLOW DESTRO DOWN

Share All sharing options for: THE MORNING CONSTITUTIONAL DECRIES YOUR ARCHITECTURAL FAILINGS

Seeing a lot of carpet, and I don't like it. You can find that kind of flooring anywhere from Red Roof Inn to NC State. We gotta show these kids we're an elite program from the ground up. Should've gone with ruby floors instead. Or beanbag chair flooring, maybe. College kids love beanbag chairs.

Can't say I love this "Noles In The Pros" bit either. 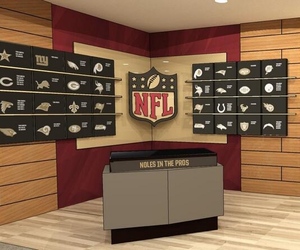 Feels like we're trying to push these kids to redshirt, win two national titles, and leave before they're juniors. And why are we tarnishing our strong Florida State brand with these done-nothing NFL teams? The Detroit Lions got a guy from Illinois. Clearly they ain't that picky.

I do like the Deion statue, though I think we coulda done more with that element. Maybe borrow the Hall of Presidents, except when George Washington starts talking, animatronic Peter Boulware comes outta nowhere and sacks his ass. Then Charlie Ward jukes Truman right out of his wingtips. All the FSU greats just doing their thing, showing recruits how we beat anyone, anywhere.

Maybe not Weinke, though. I love him, but people are gonna confuse him for Andrew Johnson.

Needs more interactive exhibits overall. Could put up a videoscreen with a 24/7 live feed of some men's bathroom at Florida, where you can watch some dumb 4 and 8er pee sitting down because he doesn't want to get his jorts messy lol. Oh, don't get all "invasive" and "privacy" on me. Whiner.

Biggest omission though? No laser turrets. Once this team finally gets the respect it deserves from the biased media, Cobra Commander's gonna come calling. With laser turrets, I think we beat him by 30. Without, it's more like a ten point Nole victory.