MY DINNER WITH ENNUI

WHEN WE PUT TWO MIDDLING FANBASES TOGETHER, WE FIND OUT WHAT HAPPENS WHEN PEOPLE STOP BEING NICE...AND START BEING REAL SAD.

Share All sharing options for: MY DINNER WITH ENNUI

SCENE: McCamment's Cattlemens Inn, a steakhouse/comedy club in Greensburg, Indiana that is the physical midpoint between Cincinnati's Nippert Stadium and Indiana's Memorial Stadium. (The emotional midpoint between the programs is "a win over Purdue that was the happiest moment of your year by default").

A Cincinnati Bearcats fan and an Indiana Hoosiers fan have met to discuss the upcoming football season. 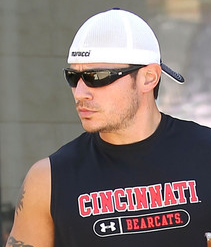 CINCY FAN: "So at least you guys'll get to play Rutgers and Maryland each year now, that's something." 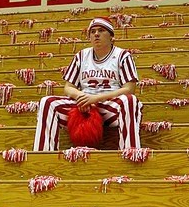 INDIANA FAN: "Is it? Crab cakes taste the same before, during, after, or in the absence of a 28-14 loss to Randy Edsall, I assume."

CINCY FAN: "With the overfishing of the seas soon the taste of crab will be in absence, too."

INDIANA FAN: "Can you get crabs from eating crab? Even if it's not possible, I'm sure it'd happen to me."

CINCY FAN: "You probably can from playing Maryland."

INDIANA FAN: "At least it'd be a football game worth remembering."

CINCY FAN: "Our last four starting QBs have broken bones during games.  I'm sure they remember those games."

IUF: "Given the number of concussions we've seen the last few years, I'm sure our guys don't."

WAITRESS: "Can I take your order?"

WAITRESS: "And how do you want that cooked?"

CF: "You know what else is rare?  A quality bowl game."

IUF: "And I'll have mine well done. Burn it if you can. I'm not good with flavor or excitement."

WAITRESS: "Are you guys alright?"

CF: "Dude, you totally just blew it with that waitress. She was hitting on you until that."

IUF: "Who cares? She'll die someday too and then I'll be alone again."

CF: "Alone like I was after the Belk Bowl loss.  Alone and cold in reasonably-priced slacks."

IUF: "I spilled steak sauce on my favorite slacks."

CF: "Slacklining leads to dozens of injuries a year."

IUF: "So Mark Schlabach has the Bearcats projected to the Cotton Bowl this year."

CF: "America's legacy with cotton cultivation is fraught.  Also, they'll probably change the bowl rules again if we do."

IUF: "Cotton's the one that shrinks in the dryer, right? Sounds a bit like my hopes and dreams."

CF: "Cotton Mather's early advocacy for inoculation saved many lives, but it was overshadowed by his involvement in the Salem witch trials.  It's a lot like how we get overshadowed recruiting in our own state, I guess."

IUF: "Wings was never the same after Lowell Mather left the show."

CF: "I just wish the Big East could've lived to see this."

IUF: "I'm not sure it ever truly lived."

HOSTESS: "Excuse me, guys?  The manager says you're depressing the comedians.  I'm going to have to ask you to leave."

IUF: "That's what my guidance counselor said, too."

IUF: "The only thing good about my life is that it couldn't get any worse." 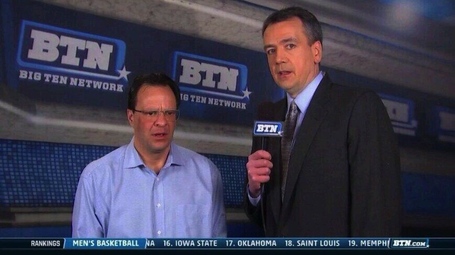