THE B1G IS TAKING A TRIP

FREE. YOUR. MIND. (EXCEPT YOU, PAT NARDUZZI. YOU KEEP YOUR MIND RIGHT DAMN THERE.)

Share All sharing options for: THE B1G IS TAKING A TRIP

Let's go back to January of 2008. January 2008 was a different time, a time when men were men, women were women, presidential primaries were taking place, "Atonement" won a Golden Globe,  and Ron Zook was a head coach at a Division 1 institution and no one was like, "huh, that's odd."

Following a 9-3 season featuring losses to Michigan* and Iowa and a win at OSU over a then-#1 Buckeye squad**, the Illinois Fighting Illini were selected to head to the Rose Bowl to take on USC. This was Illinois' first bowl game since 2002. It did not go well.

USC had 633 yards of offense against Illinois, with 344 yards on the ground. Joe McKnight averaged 12.5 yards per carry. Multiple people have uploaded this game to YouTube, proving that human beings are deeply flawed. Watching ten minutes of this game has turned me into a Hobbesian.

But what if Illinois won this game?

1.) Pete Carroll resigns because losing to Stanford (a 41-POINT UNDERDOG. 41. THAT'S INSANE. I WATCHED THAT GAME, AND IT'S STILL INSANE) and a flawed Illinois team after being ranked #1 is too much for then-AD Mike Garrett.

2.) OC Steve Sarkisian (who replaced Lane Kiffin after Kiffin went to the Raiders, because this was 2008 and man, shit was weird) is not hired by the University of Washington because that would be weird.

But who does Washington go for? Who's got experience, wins over rivals in a tough conference, and really shiny hair? 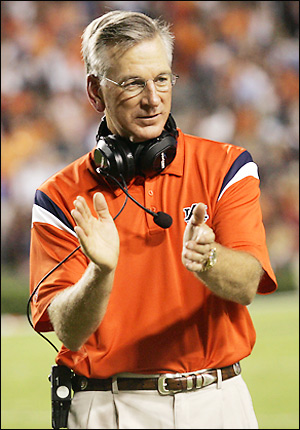 And who is joining the UW Husky party, which I assume involves blowing coat every fall and chewing on shoes?

AL BORGES AND WILL MUSCHAMP COACHING IN THE PAC-10.

AL BORGES AND WILL MUSCHAMP COACHING IN THE PAC-10.

POP A MOLLY BECAUSE I AM COVERED IN THE SWEAT OF HISTORICAL HYPOTHETICALS.

FUCK BATH SALTS, BECAUSE THIS IS THE REAL SHIT RIGHT HERE.

ARE YOU SUPPOSED TO BE ABLE TO FEEL YOUR OWN EYEBALLS IN YOUR SKULL?

I SHOULD PROBABLY SEEK MEDICAL ATTENTION.

In other B1G news:

The last time a Nebraskan ate this much Texas steer, Colt McCoy was running for his life.

This headline was 28% funnier nine months ago.

Indiana and UConn are playing a home-and-home because you didn't vaccinate your kids, did you.

Northwestern's 2014 season could go a lot of ways. A few of those ways are "very badly."

A Minnesota lineman has left the team due to concussions. Good luck, dude.

This headline features the words "Purdue" and "sprinting" and "success" and is somehow referencing football, so there's that.

Apparently Wisconsin is just sitting outside the houses of high school players in California, Texas, and Florida, not really doing much of anything, just thinking. Sure would be nice to have company.

* Lloyd Carr running this play was the most shocking moment of 2007, even more shocking than finding out that you can drink an entire bottle of Malibu and still be relatively coherent.

**They went to the national title game, losing to LSU. This same OSU squad strangled Michigan to death 17-3 in driving sleet. Following the game, I walked home, ate an entire pizza, and lay on the floor for two hours.