We didn't have time to post about this on Friday, but something as magnificent as this knows no day or time where it isn't the most important and relevant thing you'll read all day. The entirety of humanity's thrust toward the future has been away from a terrified existence on the edge of hunger and poverty and towards a future where you can eat food whenever you like, sleep in safety without fear of predation or theft, and press a button to have this sent to your house overnight. 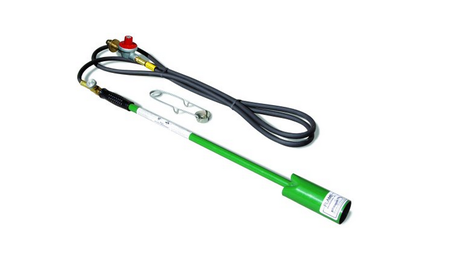 The Flame Engineering VT 2-23 C Weed Dragon Weed Burner Torch Kit allows you, the average citizen with no special skills in managing fire or fire-breathing devices, to begin burning the unholy shit out of weeds, noxious plants, and whatever else you care to incinerate. You might think there are countries on this planet where one could not just, you know, put a few numbers into a box on the computer screen and become you neighborhood's mercurial, demented fire spirit let loose on this world. You'd be right, but this is not that country.

No, this is America, and that means this magical, home-leveling hell-wand comes right to your door from the warehouse without a single soul suggesting this is a bad idea. It heats to 2,000 degrees Fahrenheit in a matter of minutes, and can project this satanic, flesh-melting power in the direction of weeds. Or somewhere else. Maybe somewhere else.

I am amazed that the Consumer Product Safety Commission hasn't banned this device. A small error can lead to severe injury.

Simply picture an army flame thrower. It puts out a devastating amount of heat that is guaranteed to nuke weeds, more efficiently than a weed whacker.

But the handle has no safety "deadman" switch. If you were to trip using this device you could easily set yourself on fire, or at least get 3rd degree burns in an instant.

That's just a single one-star review, however. The majority of reviews are positive, with 150 five star reviews citing the effectiveness of its ability to absolutely scorch earth, dirt, weeds, and the tennis shoes of its owners, who despite the screaming danger in their hands cannot deny the pure sex of a hot death cannon available on the open market. This five-star review in particular cuts to the core of what might be at the heart of the Weed Dragon's appeal.

flamethrower. flamethrower. flamethrower. How much does it cost on Amazon Prime to send this to your house, without a single policeman or mental health professional knowing about it? FIFTY BUCKS, AMERICAN. That may seem like a deal, and it is...until you realize you can buy a 400,000 BTU model for just $86, a model which has jeopardized the once-happy marriage of Richard E. Burke of Shepherdstown, West Virginia.

P.S. Somewhere in West Virginia, a mad woman with the power of a dragon is trying to burn the state down. Please update us on your wife's uncontrollable pyromaniac rage, Richard.