Share All sharing options for: A FEW BONUS ISTANBUL NOTES

Before we forget them, here's some stuff that either didn't fit into the whole of the piece we just did on Turkish soccer and Istanbul, or was simply interesting but not totally relevant to it.

1. Ataturk could write a letter. We really wanted to work this in, but this is Ataturk's note to the mothers of those who were killed at Gallipoli.

Those heroes that shed their blood and lost their lives... You are now lying in the soil of a friendly country, therefore rest in peace. There is no differences between the Johnnies and Mehmets to us where they lie side by side here in this country of ours... You, the mothers who sent their sons from far away countries, wipe away your tears: your sons are now lying in our bosom and are in peace. Having lost their lives on this land they have become our sons as well

He's everywhere in Turkey, just inescapable. And judging from that letter, not entirely in line with the long tradition of transformative national figures being entirely inhuman people.

2. The food. You can't really put a long list of things in there that you ate, but the best way to describe Turkish food is that it's Greek food that doesn't suck mixed with a lot of the good stew-y stuff from the Middle East. The Kurdish breakfast is like nine thousand little plates of everything all thrown together, and when you throw some tomatoey eggs on top of it all it's seriously one of the world's top ten breakfasts. No, we don't have the others, and no again, three of them are not at Waffle House. If that comment about Greek food saddens you, consider that I don't like lemon, feta, or yogurt that much, and neither do Turks so we were going to be buddies on this from the start. (P.S. Turks really like it when you talk about how much Greek food sucks.)

But seriously LOOK AT IT: 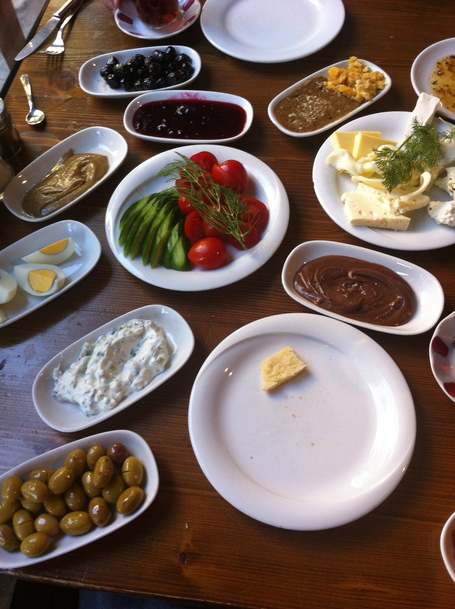 We don't even know what all that is besides DELICIOUS. We also went to that kebab place Bourdain went to, and thought it was great even while we were cursing Anthony Bourdain for going to all the places and eating all the things before we did. BUT YOU DIDN'T EAT THIS KEBAB, ANTHONY. NOT THE ONE I KILLED MYSELF.

3. Oh, and our honey is fraud. It just is. It's little better than Karo syrup, and hipster/anarcho-moms are totally right about this.  We would freebase Turkish honey, and may have because there's no law saying you can't.

4. We, as Americans, value public order too much to be really, really insane fans on par with international soccer fans There's just no spot in our social contract that allows for anything stronger than a strong cheer of "bullshit" at football games, and too much underwear in our pants to be bunched over the use of a profanity, a flare, or anything you could possibly litigate after a match. Maybe it' an implicit trust in social order, or the fear of a lawsuit, or a blind respect for the police, but we just don't have that anywhere. We are, as fans, subservient or polite or both, and not even the places you think of as being lawless, chaotic fan habitats compare. (Apologies: not even LSU.)

That should be a value-free judgment. They are this way, and we are this way, and that is how it is. It's not, though, at least not for us. We don't want tramplings, brawls, and the real risk of being hurt. We do want that passion, though, and the roiling rage. Whether you can have that without all the violence and occasional real risk is the question, and our suspicions are that the answer is one we don't want to hear. (No.)

5. Galatasaray do the Atlanta Braves/FSU tomahawk cheer in their stadium. No, we still haven't figured out exactly why, but we cut it for one reason: we weren't going to pollute such a pleasant experience any further with a mention of Florida State. That's between us, please don't tell anyone. 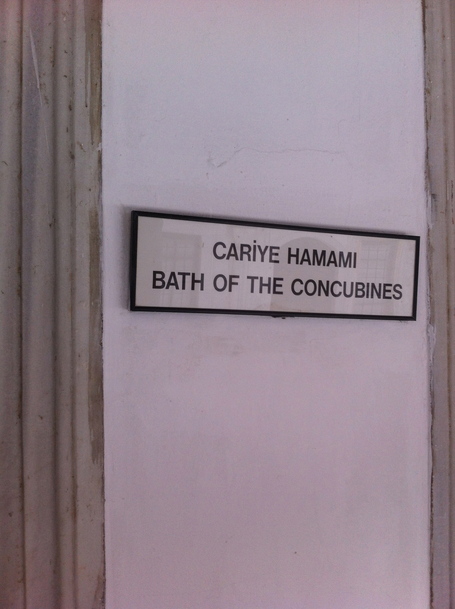 7. Lufthansa has bigass bottles of Warsteiner they will give you for free. You can drink many of them and keep drinking them on long flights when you are very tired. We recommend so much that you do this.