THE BIG TEN IS MAXIN' AND RELAXIN'

ASKING THE IMPORTANT QUESTIONS, LIKE "WHAT DOES 'HANGRY' MEAN?"

Share All sharing options for: THE BIG TEN IS MAXIN' AND RELAXIN'

The Big Ten is very much like this very chill orangutan. 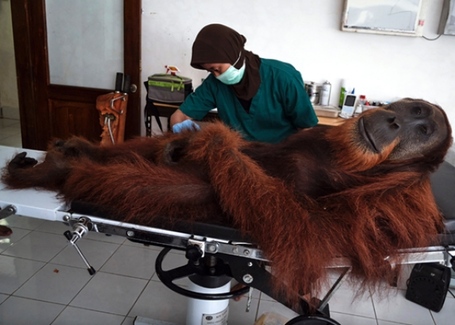 Sure, this 14-year-old male orangutan was found with pellets from an air gun in its body, and sure, the Big Ten will probably add in Southern Illinois University and ITT Tech and wherever your ex said they went to school but you weren't really paying attention, and sure, you're still probably going to get wrecked by some ACC/SEC team in some random bowl game, but it's all good. No worries, man. Just lay back, chill, and let Jim Delany handle it.

Best of luck, Nik and GR3. And those of you poo-pooing players going pro after two years - if someone said you could have millions of dollars at 20 years old but you'd have to miss your final two years of college, you'd say yes before they got past the word "dollars."

"Drunkenly shooting off a shotgun" in Ann Arbor is like publicly advocating for the Republican party in Portland - that shit ain't gonna fly.

Winter will never, ever end.

This is real, and Michigan is a strange, apparently poop-filled place.

WASH YOUR DAMN HANDS AND GET YOUR DAMN VACCINATIONS, COLUMBUS.

'Hanger' is real, and terrifying, especially if it involves someone who is driving you to Trader Joe's and appears to be prepared to murder you in cold, produce-filled blood. Just have a damn Larabar and calm down.

Illinois has new uniforms, but regrettably has not disguised its football team as something other than the Illinois football team.

Ohio State will play Illinois at home at night. Here is the last time that happened, involving terrorgod Juice Williams and J "I now work for BTN" Leman:

Whoa there, you just keep that "talent" covered up, okay? Don't need another indecent exposure arrest.

"Should kids under 14 be able to fire guns?"

"Prescription Drug Take-Back Day" should be followed by "Nah, I'm not making it into the office, my, uh, back is uh, hurting or something, so I'm just going to sit here on the couch and not move for 12 hours no everything's fine no need to call me or anything" Day.

The newest cheese experts have graduated, full of vim and vigor and untainted and unsullied by the horrors of the cheese industry. They're so young. They're all...so young.

Small-town crazy litigious people are the foundation of our small-town newspapers. Particularly when they wear banana suits.

Sometimes Pat Narduzzi doesn't like the effort. Sometimes I think that the plot lines on "Brooklyn 99" don't really reflect the realities of real police work.

Is Lawrence Thomas actually an animal? Because that sounds illegal.

DON'T KILL PEOPLE OVER DRUGS, GUYS. ESPECIALLY OVER MARIJUANA, BECAUSE ARE YOU FUCKING KIDDING ME? IF YOU ARE GETTING AGGRESSIVE ENOUGH AFTER SMOKING WEED TO TAKE ON ANYTHING ABOVE A CHIPOTLE BURRITO BOWL AND AN EPISODE OF "PLANET EARTH" ("SHALLOW SEAS," PLAYA) YOU ARE SMOKING THE WRONG FUCKING SHIT.

The Purdue provost says that Purdue "must do better" and apparently isn't referring directly to Matt Painter.

AJ Hammons is coming back to Purdue, so Purdue will probably have a basketball team next year.

I'd just like to note that the Purdue newspaper is called "The Daily Exponent."

Speaking as a millennial, a "millennial campus expansion" will require high-power wifi and episodes of "Clarissa Explains It All" available upon request.

"Dancing robot drones" is going up there with "emails from student loan corporations" and "unexpected phone calls from family members" on the list of things that fill me with terror.

No one ever wants the "cache of weapons" roommate.

Penn State's been earning those recruits like a motherfucker. Keep that shit.

Minnesota lost the national championship game to Union in hockey.

They did not handle it well.

Giving Meryl Streep an honorary degree continues to be the best decision Indiana has made since at least 2004.

Wheel of Fortune gaffes are the worst gaffes. Come on, guy.

A LEGO resume sounds like a solid way to creatively not get to the second interview.

We're going to be fighting about this unionization thing for the rest of time, aren't we.