FALCONRY'S A SPORT SO LET'S GO WIN IT

You may have done some badass things as a fearless kid, like making your own potato gun or building a really sweet ramp. There was that kid who climbed into the claw machine the other day, for instance, though his story would have been better had he learned how to get back out and gone on a nationwide claw machine crime spree. We're not saying your childhood wasn't full of accomplishment and interesting events.

But: you were not Ashol-Pan, a 13 year old Mongolian girl who hunts with her EAGLE. So, by comparison, you did nothing, and you should just be grateful you didn't have to be compared to Ashol-Pan at the time. And when a phenom like this comes along, somebody has to be bold enough to put her on the big stage where she belongs.

That somebody is Jay Jacobs.

That stage is Jordan-Hare Stadium.

Sign her today, Auburn. Show the fans you're committed to signing the best raptor handlers, all while expanding your recruiting footprint in East Asia. Imagine how inspired Gus Malzahn's team will be at the sight of a teenage girl commanding the skies. Think of the visiting mascots cowering in fear, knowing they live with unripped throats only by the grace of this powerful young woman. Picture a magical Auburn victory, like last season's Hail Mary to beat Georgia.

Now picture it with Ashol-Pan. 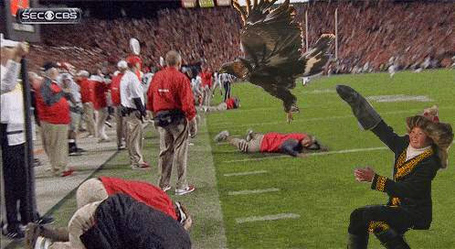 FLY US TO CHAMPIONSHIP HEAVEN, ASHOL-PAN!