THE BIG TEN IS FOREVER IN DEBT TO YOUR PRICELESS ADVICE

Share All sharing options for: THE BIG TEN IS FOREVER IN DEBT TO YOUR PRICELESS ADVICE

This week in the Big Ten, Iowa is going HBO, Illinois needs to calm down, and Northwestern lawyered us all.

"University of Iowa to Girls: Stay Away" is both an entertaining headline and a piece of straight truth because ladies you are NOT PREPARED for Iowa. 79th in the nation in offense but first in our hearts because our hearts really, really like slow developing draw plays. On a related note, our hearts are not doing particularly well.

Your weekly "what the hell is going on in Iowa City" news story. Iowa City needs a gritty Showtime series with just the right amount of nudity.

"Will this in any way affect my contract?"

I don't want cars to talk, especially cars in Ann Arbor, because I can't handle fifteen Toyota Corollas yelling at me about divesting from Israel. Shut the hell up, cars, and let me jaywalk in front of you.

The gay marriage debate in Michigan continues apace, and will probably conclude just in time for someone who totally isn't me to not be able to afford the Big House wedding of their sad, sad dreams. FYI, the wedding would take 20 minutes and feature a live reenactment of the end of the 2005 game against Penn State.

Michigan's offensive line is going to be the most optimistic tire fire of all.

"Well, I think it shows a real need for more toughness and physicality, really getting to the ball and making plays. Also, do you know if there will be pizza at this event?"

"Pizza. I mean, it's been a few hours since lunch and Mrs. Hoke says that I can't have pizza if it's not Thursday - that's our pizza night - but I heard a rumor that there might be pizza here and well I thought I'd ask you."

If Penn State takes the names off the jerseys how will I know which hell beast of Satan to avoid next year?

"Coach, you just added me on Twitter. Can you answer my..."

"I am NOT adding you on SnapChat, Coach Franklin."

The NCAA: think of it like a spirit squad for student-athletes. Like a big, expensive spirit squad. That writes checks. To athletic directors.

Urban Meyer: on the forefront of offensive play-calling and terrible handwriting.

"People should be getting paid."

"Will this influence my plans to destroy the entire Midwest with my play calling, setting veritable fire to every state from the Ohio to the Mississippi and ruining the lives of millions of people who just want peace and security and happiness and garlic bread and maybe a Big Ten title?"

"Progress" means different things to different people, so yes, I guess so.

PURDUE
Purdue, if I wanted a Star Trek technology, I'd want either a holodeck or the ability to swing my leg over a chair like Riker without looking like an idiot.
And I'd be more worried about the horrific disease known as "Purdue" than meningitis. Meningitis may kill you, but Purdue will blow out your ACLs three consecutive seasons and then lose on a buzzer-beater. (BUT SERIOUSLY, MENINGITIS CAN KILL YOU. WASH YOUR HANDS.)

"Coach Hazell, what's your reaction to Northwestern football players winning their NLRB fight to unionize?"
"I think it's great. Drew Brees is already in the player's union, so that means he can come back and play for my team! Awesome!"

MICHIGAN STATE
Good luck with that, Michigan State. Sparty does only one thing responsibly, and that's "lose one football game a year due to seventeen pass interference calls."
This is the greatest friendship in history and I will be back in just a minute because there is something in my eye.
"Turtles in Trouble" sounds like a harrowing episode of WonderPets, our greatest show for very small children or college students who are at home and a little bored.
"Coach Dantonio, what's your reaction to Northwestern football players winning their NLRB fight to unionize?"
:: stares ::
:: keeps staring ::
:: stares holes into my skull ::
:: I am now dead ::
:: Coach Dantonio is still staring ::

INDIANA
Indiana is hosting the best college debate teams for the National Debate Tournament, where they will discuss such topics as "can we get Victor Oladipo to come back" and "no really we need Victor Oladipo."
Noah Vonleh is leaving Indiana, leaving Indiana... um...
"Coach Wilson, what's your reaction to Northwestern football players winning their NLRB fight to unionize?"
:: puts up 780 yards of offense ::
:: allows 300 points on defense ::
"Uh, alright."

MINNESOTA
Minnesota is building a new indoor practice facility, because this is Minnesota:
Take out "laser cannons" and put in a quarterback named "Mitch" and yeah.
This sounds like a great idea.
"Coach Kill, what's your reaction to Northwestern football players winning their NLRB fight to unionize?"

NORTHWESTERN
I do not understand this headline.
Lots of people don't understand the NLRB ruling.
"Coach Fitzgerald, what's your reaction to your players winning their NLRB fight to unionize?" 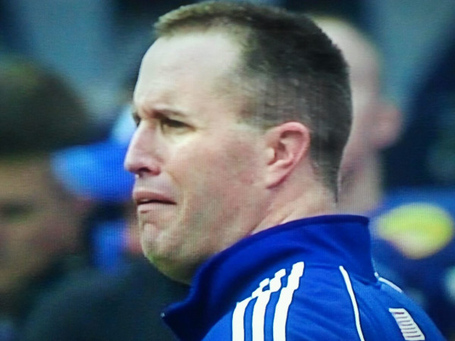 
WISCONSIN
Wisconsin weather is woeful.
Wisconsin running backs are not woeful.
This is so much Wisconsin.