THIS IS A TERRIBLE IDEA, LET'S DO IT IMMEDIATELY

Share All sharing options for: THE MORNING CONSTITUTIONAL: TAKE OUR STUPID MONEY 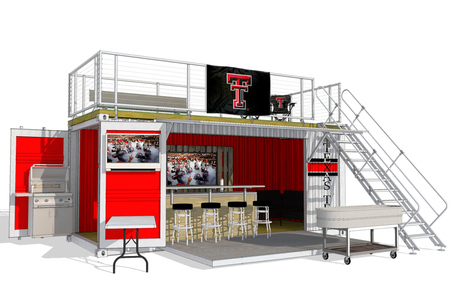 We have no idea. It looks like some kind of tailgating fantasia conjured out of the ghost of a shipping container, complete with bar, multiple flatscreens, a beer tub, and aluminum tack-on observation deck. This is a Chinese box. You open it and find a biblical hangover, an ungodly amount of money gone from your bank account, and possibly a friend crammed behind the bar. Hopefully, he's still alive, because shipping containers have lousy ventilation, and your tailgating pod doesn't need a drowsy ghost.

Yes, all sorts of toxic sludge accumulates in trace amounts over years of transport. Additionally, shipping containers heat up like the punishment box at a state labor camp in direct sunlight. On a hot day in Texas, you would essentially be inviting fellow tailgaters to brine themselves with beer and salty chips, and then cook themselves slow and low over the course of a football Saturday. You put a barbecue inside your barbecue, tailgate geniuses, which is ironic and kind of brilliant.

HOW DO YOU TRANSPORT IT? THAT THING AIN'T GOT WHEELS

We don't know. Maybe you flatbed the thing in on a massive truck. Who has a massive truck? SOMEONE YOU PROBABLY DON'T LIKE THAT MUCH. What will you have to do to get them to let them use your massive truck? PROBABLY TRY TO BE HIS FRIEND, AND INVITE HIM TO THE TAILGATE. Oh, how's that gonna go? HE'S GONNA GET TOO DRUNK, TALK ABOUT OBAMA, AND MAYBE SHIT IN THE CORNER WHILE NO ONE'S LOOKING. Man, that sounds like a problem. IT'S GONNA BE, PARTICULARLY IF YOU DON'T NOTICE IT, AND BOX THE WHOLE THING UP FOR A WEEK AND CREATE A SUPERFUND SITUATION.

Another alternative might be airlifting it to the site, and raining heavy metal boxes randomly into the beautiful scenery of your campus from above. You should definitely do this, particularly if there is heavy tree cover around the stadium.

SO WHAT'S THE AVERAGE TEMPERATURE INSIDE THEM THINGS GONNA BE IN SEPTEMBER?

The average temperature will be 183 degrees Fahrenheit.

WHAT ABOUT UP TOP?

Everything on the roof of this thing will be turned into a mannequin of ash in seconds on any day above ninety degrees.

HOW MUCH WILL IT COST?

Way more than you think it will because life is expensive anyway, and really expensive for fools. You are a fool. It will cost you.

WHAT DO I GET IN RETURN?

A giant metal box stuffed with a sports bar. Also, probably a tornado. We bet tornadoes eat these things like Doritos.

YOU WANT ONE, DON'T YOU?

Yes. Immediately. We will leave it on the campus of Florida State, and they will call it the new home of the anthropology department. You're welcome, Tallahassee.