THE MORNING CONSTITUTIONAL NEEDS YOU TO SHOWER, MATRIX

Share All sharing options for: THE MORNING CONSTITUTIONAL NEEDS YOU TO SHOWER, MATRIX

It's 10:15 EST right now, and 1985 Best Documentary Winner Commando is on AMC for the next 45 minutes. I really only want to talk about one aspect of this movie, so, if you haven't seen it, get out. Just go.

Anyways, this is what John Matrix is wearing as the movie opens: 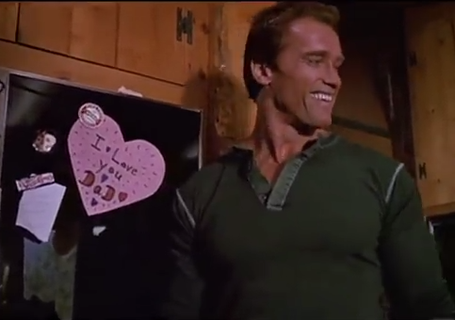 We'll assume he showered that morning; after all, he's not some shitty dad who rolls out of bed and just flips his underwear backwards because that way it's still fresh. Those dads don't get custom-made hearts from their kids.

But Matrix wears this outfit for almost the entirety of the rest of the movie, in which he 1) jumps out of a plane into a swamp, 2) fights an entire squad of mall cops (seriously, this mall has an entire infantry unit), 3) you know, all the other Commando shit. The prep for Matrix's assault to rescue his daughter is not low key. And the whole time, he's wearing the same clothes.

So here's my question: how TERRIBLE must John Matrix smell by the time he gets to Isla de Dan Hedaya? Think about how bad you smell after a regular day of doing nothing particularly strenuous. How did Rae Dawn Chong put up with this? That's disgusting, Matrix. That's absolutely disgusting.

Oh, and another thing - was he wearing this Speedo the whole time? 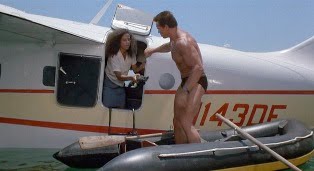