HE LOOKS JUST LIKE YOU AND ME, IF WE WERE MUPPETS

Share All sharing options for: PLEASE HELP CATCH THIS PERVY MUPPET PEEING ON PEOPLE IN GAINESVILLE

Police in Gainesville release a composite sketch of an accused serial urinator. pic.twitter.com/K8XxHuATYj

If you see this man, please contact Gainesville Police. This image is a composite sketch of the serial urinator plaguing Florida's campus, who on four different occasions has urinated on someone, exposed themselves, and then left the area on foot. He is described as "chunky," a technical term the police like to use when they decide to make fun of you for not only being a pervert, but being a fat pervert.

The description: six feet tall, husky because that's what mom called it, black, and wearing jeans made of ziploc bags, aka "baggie jeans," per the local Fox affiliate's spelling. They're very fashionable, and you do not know about them because you are old and getting further away from knowing about new kinds of jeans, and so much closer to your eternal death.

This man may also be a muppet-- a giant, pervy, dick-waggling pee-bandit muppet*, just tromping around the campus of the University of Florida not sweating at all, because muppets are made of fabric and wire. If you see him riding a bike it will blow your mind like that scene where Kermit does it in The Great Muppet Caper. Per further research, he may also swim (The Muppet Movie, "Never Before" sequence,)  tap dance (TMM, "El Sleazo" dance number,) and marry legally in the state of New York. (Muppets Take Manhattan, finale.)

*But muppets don't have urinary systems," you say. Oh, friend, you have clearly never seen The Dark Crystal: Director's Cut.

The suspect may also be an escaped Mii tired of losing to you in Wii Bowling,  Franklin the Puppet from Arrested Development, a Sim, or a superfat Jaden Smith. 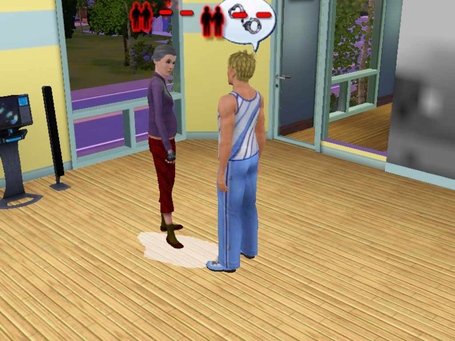