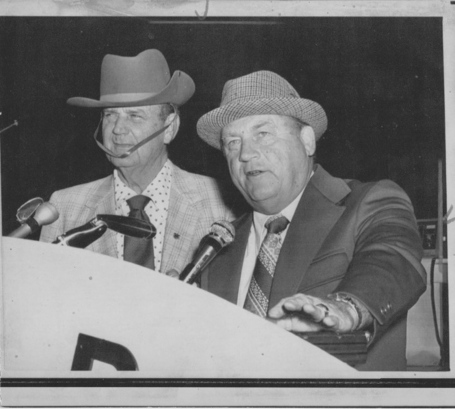 We really do have an old stack of photos someone rescued from a trash bin for us--mostly old AP photos, some old Hollywood promo photos, and random NASA ones. When we get bored, we scan a few and share them, like this photo of Bob Devaney and Bear Bryant switching hats at the 1966 Orange Bowl dinner, and then demanding more bourbon and sliced meat be delivered to their table.

That fedora is not the dreaded baby fedora, either. That's just what a normal-sized hat looked like on Bob's extremely large head. Alabama won the game 39-28, a score people only cared about in theory because bowl games used to not matter at all, and were merely an excuse for everyone to go someplace warm and screw around on someone else's dime. You could even get drunk with the other coach, and wear his hat in a goofy photo without someone getting all up your ass about not maintaining focus, and maybe drunkenly burying the front end of your rental Caddy twenty feet into the side of a South Beach oyster bar.

P.S. That's not a euphemism, because we are certain some coach did this.

P.P.S.That coach was probably Bear, and he probably made friends for life with everyone in the bar after an exchange of cash and several rounds of drinks purchased for the house.

P.P.P.S. These two really needed to play against each other more often.